The future of the environmental movement lies in the world’s cities. In 2008, for the first time in human history, more of us lived in urban environments than in any other setting.  This trend is only going to accelerate as human population approaches the 10 billion (!) mark by the end of the 21st Century. Indeed, almost two decades ago, UNFPA predicted that “[t]he growth of cities will be the single largest influence on development in the 21st century.” Subsequent developments have borne out this prediction. In 2008, UNFPA projected that, on a global level, all future population growth would be in urban areas. For good or for ill, we humans are heading down an urbanized path.

In the developing world, the burgeoning growth of urban areas has relegated more than 1 billion people to overcrowded and polluted slums, often lacking basic services such as clean water and sanitation. Even in wealthier, developed countries like the United States, urban settings present a host of environmental challenges for their current and future inhabitants. Our cities tend to have concentrated pockets of poor and minority populations. The political marginalization of these groups, coupled with an environmental ethos that valorized “the wild” over the built environment has too often left these communities behind. Indeed, one of the major insights of environmental justice is that racial minorities bear a disproportionate share of the nation’s environmental bads, while having access to only a small sliver of the environmental goods. Our national environmental laws too often fail to combat this mal-distribution of environmental amenities and harms, and rarely manage to account for the disproportionate burdens on environmental justice communities associated with cumulative pollution loads from multiple polluting sources in urban environments.

At the same time that environmental law has developed without cities in mind, cultural changes have produced a generation with a much more tenuous relationship to the natural environment than any in human history. Indeed, teaching in an urban university, it can be hard to convince students that they live in an environment. To them, “the environment” exists elsewhere—in a place with forests, fauna and few people. Their world—a world of pollution, grime, multiculturalism and subways—is emphatically not “natural” and therefore, on some fundamental level, not “an environment.”

Of course cities are affected by broader environmental considerations like climate change.  But, cities are far more than passive recipients of changes wrought elsewhere—they are the locus of nearly all major economic, social, demographic and environmental transformations. Cities are complex and multilayered environments that exist on the border between the built and the natural, with the “urban footprint” stretching far beyond a city’s political boundaries.

As such, this perceived dichotomy between the “city” and “the environment” in the law is increasingly problematic: it is often focused in a fashion that does nothing to combat (and sometimes makes worse) the poverty that can exist right alongside the resource being protected. And an overly-myopic focus on protecting “the real environment” can play into the hands of those interested in reducing environmental protections—allowing them to portray environmental advocates as environmentally unjust, or at least agnostic with respect to justice. There is at least a kernel of truth to this allegation—around the world, the preservation priorities of many large, Western environmental organizations have clashed with the development priorities of local (and often impoverished) communities who perceive hunting and resource extraction on those same lands as their most viable development option. Within the United States, too many urban communities have felt excluded from environmental priorities that focused more on preserving wild lands than on greening the cities. This justice blind spot has limited the reach and appeal of the environmental movement. Worse, it has allowed those opposed to environmental protection to portray environmental law, and environmentalism more generally, as an elitist endeavor. To the extent that urban populations perceive improving the material conditions of their lives to be in conflict with protecting the environment, environmental protection becomes yet another racial and class-based structural bias.

Both prongs of environmental justice are vitally important. Urban pollution loads have dramatic health impacts, with children in New York and Washington DC and other urban settings having disproportionately high childhood asthma rates, and blood lead levels. Among the many negative consequences flowing from these adverse health effects is one that too often gets overlooked—health effects of urban pollution loads make playing outside less possible for urban children. Theorists have recently begun to acknowledge the problems flowing from the growing dissociation between children and their environment.  The idea of a “nature deficit disorder” has taken root, with Richard Louv’s groundbreaking book “The Last Child in the Woods” sparking an international conversation about the alienation children increasingly experience from nature. Urban ills of crime and pollution only make this nature deficit problem worse.

Far too many urban children have never walked barefoot on the grass (too much broken glass and dog feces), and have only limited access to outdoor play spaces (typically playing outside means close supervision on a concrete playground). For young people whose exposure to fauna is limited to pigeons, robins, squirrels and rats, the very idea of habitat or biodiversity protection can seem hopelessly abstract. Yet this vision of New York

City as an impoverished ecosystem-less wasteland is a fiction—as regular readers of this site know, urban environments are host to a rich array of biodiversity. Indeed, even within NYC’s self-lore, counterexamples abound—witness Andrew Rudd’s recent post about the new species of leopard frog discovered in Staten Island, or the media furor over Pale Male, a red-tailed hawk that has nested for years on a fancy 5th Avenue coop just off Central Park.

Yet these kinds of stories are not uncommon. Hawks nest in Astoria Park, Prospect Park, at New York University in lower Manhattan, and Queens College. Indeed, hawks, egrets, cormorants, various species of gulls, possums, raccoons and snails are just the most visible edge of a rich biota that even includes large predators like coyotes.

Rather than embrace the richness of New York City as a thriving, albeit modified ecosystem, well-meaning attempts to combat the problem too often focus on teaching children more about the “real” environment that exists away from cities. The message children get is that “the environment is not yours. It is elsewhere, belonging to others.”

Organizations working with young people to green their current urban environment have demonstrated that teaching children about their own environment reaps tremendous dividends, empowering children to work to change their environments while simultaneously sparking their interest in science and the environment. Global Kids, an NGO that works with at risk youth has reported that participants in their Environmental Justice Summer Workshop program have improved school performance and self-esteem, even as they work to make real changes in their environment.

One of the highest profile is the MillionTrees initiative that NYC is undertaking as part of PlaNYC—New York City’s ambitious plan to reduce its carbon emissions by 30% by 2020.

As part of this initiative, New York City is preferentially planting trees in six environmental justice neighborhoods that the Parks Department identified as neighborhoods of greatest need for trees. These six neighborhoods were selected because they have fewer than average street trees and higher than average rates of asthma among young people. The hope is that additional trees will help reduce the pollutants that trigger asthma, and will also make the area more inviting to residents. Community outreach and education around tree planting also provide an opportunity to teach urban youth about trees, while expanding the urban forest provides habitat for birds and other creatures, reduces the heat island effect, and marks a step toward addressing the nature deficit.

14 April 2018 A Sense of Wonder: The Missing Ingredient to a Long-Term Value for Nature? Bronwyn Cumbo,  Sydney
Marthe Derkzen,  Arnhem/Nijmegen

“For the child….it is not half as important to know as to feel. If facts are the seeds that later produce knowledge and wisdom, then the emotions and the impressions of the senses are the fertile soil in which the seeds must grow.” —Rachel Carson, 1965, p.58. The natural world is essential to human survival providing food, filtering water, and...

Equity and Sustainability: a history of ideological convergence vs. practiced indifference The idea that equity is an important and indispensable part of sustainable development has been there from the early days. The intellectual basic for and actions taken towards sustainability... 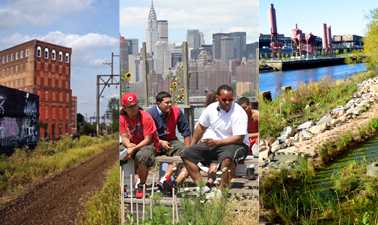 From a centuries-old pear tree marking the remnants of a castle in the Czech Republic, to an urban perimeter of abandoned ammunitions dumps in Spain, to a tiny balcony in cramped New Delhi—places that people care about dot the globe....