Mention the word biodiversity to a city dweller and images of remote natural beauty will probably come to mind — not an empty car park around the corner. Wildlife, we think, should be found in wild places, or confined to sanctuaries and national parks. But research shows that cities can in fact support biodiversity and this can have major implications for conservation efforts.

On a crowded planet, protecting species in their natural habitat is proving increasingly difficult. Humans continue to expand their networks of cities, towns and farms worldwide. By 2030, cities are expected to occupy three times as much land as they did in 2010. Remaining natural habitats are now often a fragment caught in this global web of cities connected by transportation networks. With the number of species going extinct on the rise, it is necessary to consider the potential of urban environments to serve as refuges for the survivors.

In 2010 the Convention on Biological Diversity commissioned a new global assessment of the state of biodiversity in urban areas. Their findings, published in the book Cities and Biodiversity Outlook, were not entirely bleak. It turns out that cities support biodiversity and provide opportunities for innovative approaches to conservation.

Urban habitats obviously differ in many ways from rural ones. The number of species that occur in any given city depends on the extent to which it supports native species’ habitats and on the introduction of non-native species. A recent global analysis of urban plant and bird diversity found that cities have lost an average of one-third of the native species found in their surrounding region.

While this level is worrying, it is worth noting that two-thirds of the native plant and bird species continue to exist in cities that were never designed with biodiversity protection in mind. In fact at least 20% of the world’s known bird species now occur in urban areas, as do at least 5% of the known plant species. More conscious green landscape designs can only help support more of the native species diversity.

While urbanisation displaces many species, we also know that others have adapted to not only survive, but thrive in cities. House sparrows, rock pigeons, starlings, brown rats and feral house cats are just some examples of species that are ubiquitous in many cities worldwide. More surprisingly, many rarer species are adapting to suburban environments that have taken over their native habitats, including the San Joaquin Kit Fox of central California.

For many native species, urban habitats may actually be more attractive as refuges. They provide easier and more predictable access to water and food resources, warmer temperatures in the winter and often fewer predators. Continued breeding can drive the long-term evolution of urban species as they adapt to their new environment.

Species such as the house sparrow have evolved to be so strongly dependent on human habitation that their numbers have rapidly declined over recent decades following changes in the urban landscape. Warmer nights and feeding by humans have even changed the migration pathways and geographic ranges of some migratory species. For example, a population of European Blackcap Warblers now winters in suburban southern England instead of Africa.

Noise pollution is another factor influencing urban ecology and affecting the many animals that communicate using sound, such as birds, frogs and some insects. Birds that have adapted to the urban soundscape show distinct dialects with songs that are simpler, louder or higher pitched to cut through the background noise.

San Francisco’s resident White-Crowned Sparrows have changed their tune over the past 30 years as the city has grown noisier, losing some distinct notes of their songs. This may have evolutionary consequences because dialect formation is often the first step towards speciation. Other studies have found genetic differences between urban and non-urban populations of some species, indicating fairly rapid evolutionary changes.

New wildlife communities are coming together in cities, often with accidental manipulation and active management by humans. These communities can play an important role in both the urban ecosystems and for surrounding habitats. Gardens, for example, can support important reservoir populations of bees and other pollinators that could be valuable for many plants but find it difficult to survive under modern intensive agriculture.

So the overall picture is not bleak. Cities can provides new habitats and niches that may be quite different from those in natural ecosystems, but still can support a variety of species. Species that evolve under such urban conditions may well represent what the future holds for much of Earth’s biodiversity. 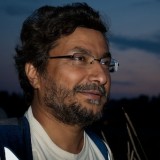 About the Writer:
Madhusudan Katti

Madhusudan is an evolutionary ecologist who discovered birds as an undergrad after growing up a nature-oblivious urban kid near Bombay, went chasing after vanishing wildernesses in the Himalaya and Western Ghats as a graduate student, and returned to study cities grown up as a reconciliation ecologist.

2 thoughts on “Biodiversity Can Flourish on an Urban Planet”


When we conjure up images of animals in temperate cities we think of such pesky creatures as pigeons, cockroaches, English sparrows, crows, rats and mice, while in other cities around the world urban dwellers encounter geckos, Indian mynas, monkeys, raccoon-dogs...

This is a tale of an experience I had in Alachua County, Florida. The challenge? How can we encourage the construction of more natural stormwater ponds, which offer more wildlife habitat and more efficient ways to remove pollutants? We have...