Recently Buenos Aires, the capital city of Argentina, has begun a transformation to reduce the urban processes that have negative effects on biodiversity.

The city has an area of 202 square kilometers and a population of 2.9 million. Every day up to four million people enter in the city from the metropolitan area to work. During the last century the urban development contributed to the degradation of the natural environment that creates a rupture in the continuity of the natural ecosystem.

To mitigate this situation some strategies have been developed to strengthen and recover the relation between the city and its green and blue natural capital. The revitalization of the waterfront, squares, parks and green woodland connectors has been implemented to expand and regenerate permeable urban surface, creating healthier environments for biodiversity. Policies at metropolitan scale propose to rehabilitate biocorridors along watercourses (Fig.1).

But what is the reality behind this strategy? So far, the implemented measures connecting green areas through a structure of wooded corridors are aimed to improve public space, especially for citizens’ satisfaction. Up to now, little has been done for an ecological rehabilitation that puts priority on the local flora and fauna, restoring the living environment to sustainable conditions over time.

Birds are charismatic components of urban nature and we can rejoice in their singing and presence in our day to day lives. They are also well known as bioindicators. Because urbanisation’s effects and patterns can be effective environmental filters, driving many sensitive birds out of town, many articles around the world have analyzed the complex factors affecting species richness, composition and abundance. As metropolitan areas expand into the surrounding natural remnants and rural zones, native habitats significant for the avifauna become progressively altered, fragmented or substituted with managed systems. The rule of thumb is that in the city sensitive birds are replaced by generalists — especially opportunists such as doves and sparrows (Fig. 2) — and overall avian richness is lower than in the surrounding areas. In general, the larger the cities are, the greater the negative effects on biodiversity. In addition, bird communities can be shaped directly by on site-specific land cover variables within urban habitats, and by overall features of the surrounding landscape including the proximity of large forested areas and developed areas.

Factors affecting birds are multidimensional, so local and regional-scale applied ecological research is needed to understand which features can favor bird communities. Finally, we need information to improve urban planning and design with ecologically informed suggestions to policy-makers.

In the pampa ecoregion where I live, many cities are located near water bodies comprising riparian habitats. These productive lowlands — composed of grasslands, marsh vegetation, wet woodland and vegetated water cover — are significant biocorridors. They provide habitat, refuge and food sources in relatively unmanaged ecosystems supporting higher bird diversity than other urban environments. One wonders to what extent different assemblages of land cover — such as the surface area of vegetated water bodies, native and exotic tree canopy cover, grasslands, paved paths, buildings, parking lots, mowed grass and fallow field, pasture or shrubs — impacts the diversity of birds along riparian cities of quite diverse size. Surveys carried out in nine cities with diverse population density (28-5700 inhabitants/km2) along 252 km riparian gradient captured up to 49 bird species, representing 63% more than the richness recorded in Buenos Aires metropolitan watercourses (Fig. 3).

Analyses of data show that 20 common species were found in every city, preferring the riparian sites near the city centers, while grassland and forests birds were city avoiders and significantly linked to natural patches with heterogeneity of habitats. Our results suggest that pampean avian communities along the riparian corridors are shaped more by site-specific land cover variables than overall landscape context and that bird richness was not so much linked to city size and density.

Based on the conclusions of the analysis, municipalities in this region — including small towns — should consider, from a variety of ecological perspectives, that restoring a riparian corridor is more effective than foresting the city. The riparian zone, because of its structural and compositional complexity, is a supplier of nutrients and sediments to the channel, of microhabitats for vegetation and animals, as well and an important climate regulator. 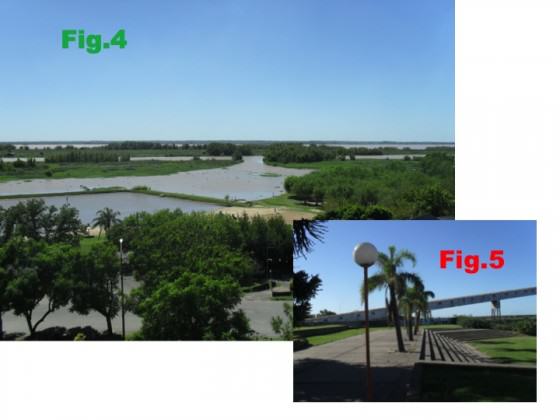 (b) reducing the exotic tree cover and amount of highly managed grass area;

(c) creating and sustaining more structurally diverse native vegetation patches within and surrounding all water bodies (Fig. 5). This can directly affect the characteristic of streams regulating waterflow and erosion, nutrient balance and the formation of microhabitats relevant to vertebrates and invertebrates. In doing so, they should remember that as streams change over time pioneer and longer lived plants should be used;

But these recommendations are not quite new and we should ask ourselves why they are not put into practice? This brings us to the hackneyed discussion of the disconnection between those who investigate environmental issues and planners.

Programs that try to preserve, rehabilitate or restore biodiversity along river corridors should consider their complexity from the earliest stages of the project. Generally these areas are shared between different municipalities, which makes necessary a joint work that brings together various authorities and bodies in harmony.

Those who manage urban territory usually respond more to political mandates following particular agendas with action times narrower than an ecological rehabilitation project requires. In addition,such managers often lack the technical knowledge that the project requires, while the specialists are working in other areas (universities, institutes). There is often mutual distrust between them.

Designing successful projects means breaking this vicious circle fed by political and personal interests seeking ways to work together to provide greater flexibility in the actions.

3 thoughts on “Buenos Aires Tries to Design for Biodiversity”

From early on as a family, we considered ourselves to be fairly knowledgeable about environmental issues, such as plastic pollution, deforestation, and global warming from all we’d learnt through the media. We recycled. We bought fair-trade items like chocolate and...