Urban waste management is a crucial component of our constant interaction with the environment within and around our cities. Managing waste efficiently and sustainably is a unique challenge for us all that depends on development trends, socioeconomic composition, political situation, and a host of other factors.

This dependence is especially evident in China, where the past 30 years of rapid growth in size and population of cities has brought about mass lifestyle transitions as Chinese people migrate from rural to urban areas. The massive shifts to consumerist lifestyles by millions of Chinese have produced tremendous quantities of waste, while underdeveloped public waste management services have become severely stressed. On the surface, addressing China’s urban waste may seem like an increasingly daunting task. However, I believe that if sustainably managed and reclaimed, China’s urban waste stream will be a valuable resource and a solution to urban social justice issues, making Chinese cities healthier human and natural ecosystems.

China produces around 300 million tons of waste a year, the large majority of which comes from cities. Currently, Chinese urban waste management services generally collect unsorted municipal solid waste (MSW) to be disposed of in landfills or waste incinerators around the periphery of the city or further out into the countryside. Even if separate bins are available for recyclable and non-recyclable waste, government waste services do not have the capacity to operate a recycling system; the separated waste is bundled together into one truck all the same.

The composition and quantity of Chinese urban waste creates many problems for landfills and waste incineration. Chinese landfills are similar to other landfills around the world in that organic matter does not decompose properly in the landfill’s anaerobic conditions. This results in the release methane, a potent greenhouse gas. Since most of the solid urban waste stream consists of organic waste, the Chinese urban waste stream is an inefficient fuel for incineration. Even if proper management systems for composting, recycling, and further landfill waste reduction were put in place, a societal shift is still necessary for urban residents to change their consumption and waste disposal behaviors for waste management systems to be effective.

It is important to consider the human element of China’s urban waste system to understand how it affects the livability of Chinese cities. In addition to poor waste collection infrastructure, investment, and enforcement, the current waste system in China perpetuates social inequalities for rural-to-urban migrants who enter urban spaces with low socioeconomic statuses. Landfills and incubators are pushed to the outskirts of the city where poor migrants live, bringing along toxic fumes of incineration, disturbances from trucking of waste, and pollution of water, air, and soil. This leaves the wealthier inner city areas relatively clean, while the pollution impacts of their waste are exported to small towns and poor communities that are socially, politically, and economically marginalized from the city. Beijing Besieged by Waste, a documentary directed by Wang Jiuliang, vividly portrays this phenomenon.

A large number of migrants dominate urban recycling of any valuable materials, and make a living off of hand picking through rubbish bins outside buildings, along streets, etc. to collect paper, cardboard, plastic, metals, electronic waste, or anything of recyclable value. This informal recycling sector is extremely efficient. It is estimated that approximately 0.56-0.93% of the Chinese urban population, approximately 3.3-5.6 million people, are involved in the informal recycling sector, and are responsible for recycling about 17-38% by weight of Chinese municipal solid waste. The informal recycling sector’s contribution to urban waste management is significant even if the exact amount is unclear; it has never been formally documented. For example, local waste experts and activists say that in Beijing alone there are around 200,000 informal collectors working seven days a week, collecting around 30% by weight of the total MSW. In cities all over China, informal collectors take advantage of the local governments’ inability to provide adequate infrastructure, services, and education for a formal recycling system.

However, the migrants involved in this informal sector earn very little for the effort they spend collecting waste across the city. While urban recycling depends on their hard work, informal collectors are often older, still live in very poor conditions, and have jobs which become increasingly difficult as city areas expand. Informal recycling centers get shut-down by local governments and relocated farther and farther from the center of the growing city, increasing collectors’ commute costs and time, and reducing the city’s overall recycling rate. Experts in this field fear that as the informal sector faces greater challenges, urban recycling rates will decline, and recycling programs that governments establish without the informal sector will fail to be as efficient at reclaiming these valuable materials.

Attempts to solve the problem

Chinese cities have tried different methods to address urban waste challenges. Several years ago, cities tried highly technical composting systems which were theoretically able to sort mixed waste mechanically and compost the biodegradable portion of the urban waste stream. Unfortunately, the system did not work as planned, and the toxic sludge output from the composting process was not only unusable, but also a public health hazard. Cities quickly abandoned the composting push, except for some small community-level composting pilot programs that have been successful in some areas.

More recently, there has been a large interest in waste incineration, fueled by the idea that burning waste will address landfill space limitation issues and the energy from incineration will generate revenue for the city. While some regard incineration as an acceptable practice in the U.S. and Europe, the unsorted Chinese urban waste stream, with high proportions of damp organic material, does not make for efficient incinerator fuel. Much more fuel is required to burn damp waste, increasing the costs and decreasing if not nullifying the profits from energy generation.

Waste incinerators in China are also poorly regulated, and the resulting toxic air pollution is an environmental and public health issue that affects nearby poor communities the most. The central government’s recent interest in using anaerobic digesters to decompose organic waste and capture the methane as a fuel source is potentially a positive shift in the right direction. There are now many large-scale anaerobic digester pilot projects in China.

Paper, plastic, metal and organic wastes are valuable resources for urban production and consumption, and should be efficiently and justly collected, processed and fed back into the urban ecosystem to establish a more circular economy.

Below are a few key areas that I think are among the most important for decreasing the environmental footprint of China’s urban waste.

Of course, these changes will be difficult. Public policy and regulations are not enough. As is the case with most other issues in China and the developing world, there needs to be reliable and accessible data so we can begin to fully understand the scope of the problems and which solutions are effective. Governments must also enforce policies and create an efficient waste collection infrastructure. We also cannot forget that public education for China’s economically and socially diverse population is no easy task, yet will be crucial for proper waste separation at the source of disposal. As Chinese cities continue to grow rapidly and strive to achieve world-class status, investment in sustainable urban waste management systems and a broader movement towards a circular economy model will be necessary for more environmentally friendly, livable, and sustainable cities. 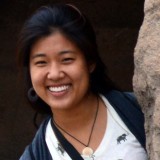 About the Writer:
Judy Li


This past summer in Beijing, my coworker initiated a zero waste campaign for the office. Under the campaign, we pledged to live zero waste (or, at least, to consciously minimize our waste to the most practical degree) for as long...

21 June 2016 What is the Meaning of a Potato? Cuisine as Language for Biocultural Connectivity William Dunbar,  Tokyo

A cuisine is a “culinary language” that communicates values and forms bonds between people just as effectively as words. This was one of the messages of Mr. Gastón Acurio Jaramillo, Peruvian chef and “ambassador of Peruvian cuisine”, in his keynote speech at the 4th World Congress of Biosphere Reserves in Lima this past March. Acurio is known as Peru’s top...

Today’s post celebrates highlights from TNOC writing in 2016. These contributions, originating around the world, were widely read, offer novel points of view, are somehow disruptive in a useful way, or combine these characteristics. Certainly, all 550+ TNOC essays and roundtables are...