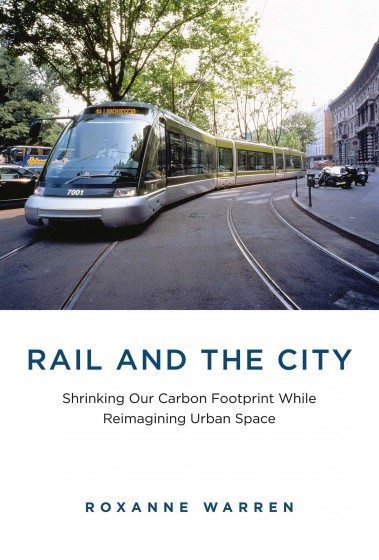 Like a dog with a bone, some of us just can’t let go of the notion of rail in cities. I’m certainly one of them. Since most cities dedicate more than 50 percent of their land area to transportation, and for 100 percent of contemporary cities, the majority of that space is dedicated to the almighty automobile, it is difficult to imagine how the nature of cities gets much better without dealing with the car. And it is easy to see electric rail systems as a compelling alternative, speeding us along green rights-of-way that lead to quiet, mixed-use, work/residential neighborhoods, with access to new spaces for playing and relaxing. One can see cities striving for these idyllic biophilic combinations in Europe and parts of South America, even in Asia, but the arguments put forth by numerous authors from diverse perspectives (myself included) have fallen on deaf ears for generations of Americans, who have found the combination of oil, cars, and suburbs more compelling still.

The most recent person to gnaw this particular femur is the New York City architect and light rail advocate, Roxanne Warren, in Rail and the City: Shrinking our Carbon Footprint While Reimagining Urban Space. Warren bites deep into what she calls the triple tyrannies: traffic congestion, dependency on petroleum, and paved environments. She shows that these three tyrants are mere henchmen at the beck and call of the American emperor pro temp: the automobile. Warren shuttles us through seven chapters that take on various aspects of why the car is bad (urban sprawl, pollution, space requirements, climate-changing pollution) and why trains are good (more space efficient, more energy efficient, better for healthy lifestyles, better for the disabled and elderly).

A long-time leader in “Vision42”, a fascinating proposal for a Manhattan light rail line extending across the island from river to river along 42nd Street (and possibly circling back via a loop along 34th Street), Warren knows well the pros and cons of what she writes. Reading her book, I feel like I can hear her in the offices of New York City politicians, or speaking before community groups, or honing the case with her rail friends at conferences, reinforcing her case emphatically and drawing the links between transportation and land use, land use and quality of life. The advantages for urban railways are manifold: less air pollution (including carbon dioxide, as suggested by the subtitle); more available space; less noise; complementarity with walking and bicycling; and the potential to encourage renewable energy. But still, most people don’t get it.

Warren argues that change is on its way, if incrementally, and we should not lose hope. She points out that streetcar mileage has actually been increasing in America over the last few decades (though not in New York City, where the rail du jour is the subway), and that there appears to be a shift in attitude as millennial Americans are opting for car-sharing schemes and urban lifestyles with greater appetite than previous generations. “Flexibility and mobility” [she quotes Richard Florida] “are key survival principles of the modern economy.” She sees what I see and what many others have seen before: that streetcars and light rail systems can provide exactly what’s required to maximize space and minimize energy consumption, as long as the cities around them are built with sufficient density and diversity to support rail travel.

Mixed use and density are not a problem in Warren’s New York. In fact, the main obstacle to light rail in cities, or indeed any form of shared transportation, is that Americans love their privacy and hate the additional governmental cost of public transportation. For all of us who appreciate the benefits of rail in cities, perhaps we need to adopt a new tactic that focuses on interests, not positions. Our interests are in shrinking our carbon footprint and making cities better, not the advocating for or against any one technology. In this light, the part of Warren’s book I found most thought-provoking was a short passage about autonomous cars.

Autonomous cars are not something I wrote about in Terra Nova: The New World Without Oil, Cars, and Suburbs (Abrams, 2013), which covers much the same ground as Warren’s book, nor something that Richard Gilbert and Anthony Perl wrote about in Transport Revolutions: Moving People and Freight Without Oil (New Society Publishers, 2010), another volume in this vein that I highly recommend. Warren dismisses self-driving cars as just the latest continuation of the space-hogging habits of the vehicles we drive ourselves, but I have begun to wonder if she, or the rest of us rail advocates, should be so hasty. If self-driving cars were electric, they would have the same benefits as light rail and other electrified rail systems, pushing the emissions out to the power plants where they could be replaced by renewable, non-polluting sources such as wind and solar. Warren points out, and autonomous car advocates are fond of telling, that most cars spend 96 percent of the time doing nothing, sitting around filling space that otherwise could be more profitably used. If urban Americans shifted from car ownership to car-sharing, on an “Uber” type model, with self-driving cars that we call up by app, then we would need many fewer cars (by some estimates 40 percent fewer). Fewer cars would mean fewer roads and parking lots and less traffic congestion. And if computers are doing the driving, autonomous cars could move closer together in platoons, perhaps even hitch together, without needing that psychological cushion space that human drivers require. Costs go down because there are no railways, just the streets we have today, and acceptance goes up because not only is it faster, quicker, quieter, cheaper (no car insurance required) and more fuel efficient, but also private.

In other words, is there a way to have all the benefits of rail in city without the rails? If so, then all of us who care about nature in the city should get ready for a ride.

About the Writer:
Eric Sanderson

Eric Sanderson is a Senior Conservation Ecologist at the Wildlife Conservation Society, and the author of Mannahatta: A Natural History of New York City.

White Elephant: 2. figurative. A burdensome or costly objective, enterprise, or possession, esp. one that appears magnificent; a financial liability. With reference to the story that the kings of Siam (now Thailand) would make a present of a white elephant to courtiers who had displeased them, in order to ruin the recipient by the cost of its maintenance.[i] I. Often when...

25 June 2017 The Effect of Iteration on Urban Form, Part I: Fractals and the Creation of Complexity Mathieu Hélie,  Montréal

In a previous article I proposed that we adopt a perspective on preservation that allowed for transformation and change of what is to be preserved. This type of change has a more precise definition: iteration. To iterate means to “cover...