Cities are largely viewed as cultural constructs, built by humans for humans. However, the reality is that animals, whether wild or domesticated, also participate in the creation and definition of cities as sociopolitical spaces. Animals are a part of everyday urban life. Whether you are a pet-owner, a birdwatcher, or simply a person who walks on sidewalks or in the park, interactions with animals are unavoidable. We often take these encounters for granted, rarely pausing to consider their ramifications.

In Urban Animals: Crowding in Zoocities, Dr. Tora Holmberg, a sociology professor and lecturer at Sweden’s Uppsala University, asks the question: What are the multi-species experiences and politics of living in a city? The book explores a number of controversies regarding human/animal relations in urban areas, including the politics of space (who belongs where?), and the ability of animals to challenge established social norms.

Animals in the urban space have the ability to influence social, political and cultural processes.

Urban Animals begins with a chapter outlining the analytical framework employed throughout the book. Here, Holmberg claims that by expanding sociological theories beyond human perspectives to animal perspectives, human/animal crowding can be explored in ways that classical sociology is unable to achieve. Holmberg aims to remove humans from the center of analysis, placing the experiences of our nonhuman urban neighbors at the fore. She also emphasizes that studying crowding of any sort is, by definition, a spatial process. Urban areas consist of numerous types of spaces: domestic, public, commercial, industrial, etc. The spatial context of human/animal interactions has major effects on the manner in which the participants—human and animal—and the nature of the interaction, are perceived. Although wild animals certainly participate in these sorts of encounters, Urban Animals focuses on interactions between humans and their pets, mainly cats and dogs. How do our pets contribute to the delineation and definitions of our urban spaces? How do they influence perceptions of their human counterparts? 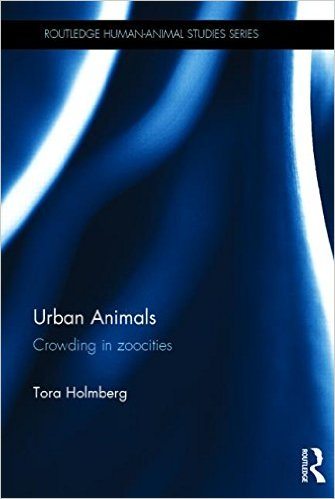 In order to answer these questions, Holmberg splits the book into three parts. Part I consists of two chapters, the first of which looks at how dogs have helped shape political and social processes centered on a public beach in Santa Cruz, California, and another about how urban cats in Sweden are defined and correspondingly treated. Swedish law is specific about how to deal with feral cats, but deciding which cats qualify as ‘feral’ is a different process entirely. Part II also contains two chapters, the first of which addresses animal hoarding through multiple lenses, such as behavioral scientific accounts, animal welfare data and U.S. reality TV shows. The next chapter takes a look at ‘cat ladies,’ investigating connections between species and gender through analysis of the portrayals of so-called ‘crazy cat ladies.’ Part III outlines the promises of crowding. A chapter on the opportunities presented by crowding is followed by a closing chapter, which consists of a conversation between Holmberg and Swedish artist, Katja Aglert.

Urban Animals does many things very well. The most important thing this book does is simple: it asks questions. Many of the themes explored here are relatively new in sociological research. The contribution of this book is its ability to form the foundation for future work in the field, more than any answers it provides to existing questions. By using a nonhuman-centered framework, it sheds light on issues from a very different angle than that from which we are used to approaching such subjects. As Holmberg notes early on in the book, cities are expanding worldwide, with more and more humans and animals living in cities. Using the animal-focused framework presented here will be crucial in understanding urban life of the present and future.

Another thing Holmberg communicates quite well through the book is that animals aren’t just along for the ride. As shown by the case of Its Beach in Santa Cruz, California, dogs, though they may be ‘mute’ in that they don’t explicitly speak English, do have ‘agency,’ a sociological term for the ability to exert influence. An iconic ‘dog beach’ in the local culture, Its Beach has recently come under fire from citizens who’d like to see the beach cleaned up and dogs excluded. In excerpts from the political arguments, it is clear that the rhetoric revolves around the dogs, with the pro-dog side pointing out not only the beach’s benefit to the dogs, but also the dogs’ benefit to the community. Here, dogs are actively participating in the sociocultural definition of a place.

Holmberg also demonstrates the role of space in human/animal interactions. A great example of how space influences definitions of animals is the case of urban cats in Sweden. Cats can be categorized (Holmberg uses the pun ‘cat-egorized’) according to their perceived place of belonging: house, farm, alley, etc. How a cat is placed in these cat-egories influences both how the cat is viewed in relation to feral animal laws, as well as how the people who associate with the animals are portrayed. For example, twenty cats living in an alley are viewed quite differently than twenty cats living in a living room. The alley cats can be considered technically feral, and therefore subject to municipal interference, e.g., population control measures. House cats are generally exempt from these injunctions, because they are perceived as closer to humans, somehow more human than feral cats through their close relationship with one or multiple humans.

There is a tipping point, though. Too many cats in a house can invert the relationship between master and pet once the care requirements of the cats exceed the capabilities of their human companion. At this point, the ownership dynamic between human and cat blurs. Holmberg relates a number of cases in which the cats have taken over the house, seemingly subjecting their human to answer to their every beck and call. In these cases, it is possible for animals to exert influence, i.e., to have agency, over the perception of their human counterparts. ‘Crazy cat ladies’ are formed in this way. In contrast, a citizen feeding alley cats is less likely to experience this sort of role inversion, maybe because alley cats are perceived as further from ‘human,’ so it is more difficult for them to ‘rise above’ their masters. Clearly, animals have the ability to influence social, political and cultural processes.

Despite all the strengths of Urban Animals, it is not a book for the faint of heart. Although it investigates familiar events and themes, the analytic content is quite dense. The text is rife with sociological theory, making the finer details of the analyses relatively inaccessible to a reader without experience in the area. Holmberg refers to the previous work of numerous sociologists, seemingly assuming that the reader is already somewhat familiar with them. This book is clearly aimed at practicing sociologists. To an outsider (such as the reviewer), this certainly clouds the points being made, but to a professional it would only serve to enhance and strengthen Holmberg’s arguments.

The other trying aspect of Urban Animals is its structure. Because it asks questions instead of seeking answers, it is not organized into a strict framework of presenting the problem, finding methods to address it, and conclusions. Each chapter instead dwells on a certain case, and addresses slightly different issues. Some common threads run though all or many of the chapters, such as the politics of space, while others, such as the ‘verminization’ of cat ladies, appear in one, or maybe two, chapters. This makes following the main point of the book difficult, though not impossible, and Holmberg does well to reiterate the goals, conclusions and opportunities brought to light in the book’s concluding chapters. Some readers may find this an obstacle, while others may appreciate the meandering nature of the narrative.

Despite the difficulties faced when reading Urban Animals, I can certainly say that it expanded my awareness of the perceptions of urban animals. As a biologist, I definitely felt slightly marginalized by the book’s sociological language, but for anyone interested in the nature of human/animal interactions, this book is sure to be a valuable resource. Professional sociologists will find that it advances the field toward a nonhuman-centered framework, and brings nonhuman perspectives to light. Interested lay readers may have to battle through some technical terminology and theory, but the case studies examined are both enlightening and challenging. Ultimately, I believe that Urban Animals would be an instructive read for anyone with an academic interest in urban animals, and an eye-opening experience for those without much sociological knowledge.

There is seldom a “silver bullet”, single pathway to success when it comes to protecting urban greenspaces. Multiple strategies, often modified, sometimes abandoned, are typically the only way grassroots-based urban conservation efforts succeed in the face of bureaucratic resistance. Efforts to preserve and restore a 160-acre wetland in the Willamette River floodplain near downtown Portland, Oregon is a classic case...

Connecting to nature where you live Regional parks and park systems are a perfect response to the modern conundrum of creating dense urban fabrics where people can become increasingly isolated from nature. The scale of a regional park system means...

What if urban resource management and conservation reflected not just the politics and science of the day, but were rooted in creation stories, place-name stories, and personal stories about the relationships people have with place? This kind of thinking is...