Bestiaries—elaborate and fantastical combinations of medieval scientific knowledge and folklore—were meant to describe the animal life of the Earth. These large volumes depict all kinds of different animals using intricate illustrations, and almost never distinguish between fact and fiction.

The Urban Bestiary is a beautiful marriage of writing meant for the soul and for the mind, with information about interacting closely with wildlife.
The most famous of these kinds of catalogs, the Aberdeen Bestiary, was created in the 12th century, and now resides in the Aberdeen University Library. Its entry for the beaver states that, when pursued, a beaver “bites off its own testicles and throws them in the hunter’s face and, taking flight, escapes.” Beaver testicles were, in those days, highly valued for their medicinal purposes. The Aberdeen Bestiary is full of fantastical descriptions like this. It has been digitized by the University of Aberdeen, and can be accessed online here.

Lyanda Lynn Haupt has created a modern version of a bestiary, set in the urban wild of Seattle, Washington, USA. Devoting a chapter to each creature, Haupt describes the habits of her urban cohabitants. She sticks to the tradition of mixing facts and lore; The Urban Bestiary is a combination of Haupt’s personal experiences with these creatures and scientific tidbits. She gives advice on topics from tracking animals to urban deer control to human-wildlife conflict. Not only does this book tell stories, it also provides information about real ways to interact more closely with your own local wildlife. 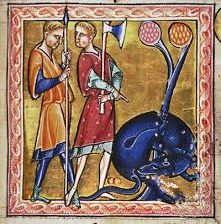 Haupt dedicates each section of The Urban Bestiary to a different type of urban fauna or flora. One part for the mammals (“The Furred”), one for the birds (“The Feathered”), and one for the rest (“The Branching and the Rooted”), which includes one chapter each for trees and humans, the engineers of the urban ecosystem. Disappointingly missing are the reptiles, amphibians, and insects, some of the most maligned of urban critters. In her introduction, Haupt states: “My intent was not to be all-inclusive, but rather to treat species that are common in most urban places and those that have a particular lesson for co-existing with wildlife”. Surely, Haupt missed a chance here to defend an unappreciated toad, a slandered snake, or a seemingly insignificant grasshopper. 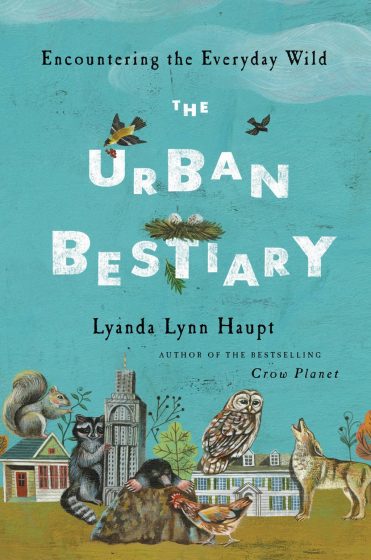 That said, The Urban Bestiary does provide some worthwhile lessons. From opossums, we learn not to judge another being strictly by its (in the opossum’s case, shocking) appearance. From mountain lions and bears, we learn humility in the face of nature’s power. From the oft-overlooked city birds (pigeons, starlings, house sparrows), we learn to appreciate the wildlife we do have in cities, instead of lamenting an absence of “nature”. From crows, we learn about non-human intelligence. From opossums, we learn not to judge by appearances. And from trees, we learn a sense of time deeper than that usually available to humans. The book is full of lessons such as these that we can learn from the everyday nature we experience even in the most urban of cities.

The Urban Bestiary is a beautiful marriage of writing meant for the soul and for the mind. By observing closely the habits of our non-human neighbors, we can learn about animals, plants, our neighborhood, our planet, and ourselves. Haupt of describes in detail the habits of, and lessons to be learned from, each organism she presents. For any urban dweller looking to connect with nature, The Urban Bestiary is a superb first step. Even skilled naturalists may find some useful tips on urban tracking or animal behavior. Haupt’s goal “is that this is just the start of a huge, earthen bestiary, an invitation to wild intimacy, written daily by all of us, through attention to the creatures in our midst.”


Spiders are among my favorite urban neighbors. They’re flashy, charismatic, and they’re everywhere. Spiders also evoke a range of emotions and thoughts from their human cohabitants. If you see one in your house do you squish it? Do you capture...

I have lived in an array of fascinating cities, and visited a host of others. I have loved many (New York, Hong Kong, Harare and Berlin); been miserable in a few (London and Pretoria); oddly disappointed by some (San Francisco, Dublin and Sydney) overwhelmed by others (Shanghai and Cairo); and frankly terrified by at least two (Port Moresby and Lagos)....

In his book Green Urbanism Tim Beatley touted Portland, Oregon as one example of progressive regional, bioregional, and metropolitan-scale greenspace planning in the U.S.  It is true that the Portland metropolitan region is well known for its land use planning and...

Before becoming India’s information technology hub, Bengaluru was known for its numerous lakes and green spaces. Rapid urbanization has led to the disappearance of many of these ecosystems. Those that remain face a range of challenges: residential and commercial construction,...