In the summer of 2016, the largest Soviet-era residential area of Estonia was living a new life. The district Lasnamäe, including Estonia’s capital city, Tallinn, was built in the late 70s, but it has fallen into stagnation. Little has changed since its inception, and those big plans are still unfinished. A vast traffic channel to the city center is waiting for a planned-but-never-built central tramway. The road, the bridges, and the stairways-to-nowhere are completed, desperately waiting for the tram.

The installation of a barley field where a planned tramway lays empty reminds us of the cycles of nature and life.

This summer, Lasnamäe’s urban plan got a new mid-term solution: I and another young designer planted a barley field on the unused stairs in the middle of the highway. Ann Press and I are both practicing interior architects and Master’s degree students at the Estonian Academy of Arts’ Interior Architecture Department. What started off as schoolwork for us grew into a significant urban installation.

The idea of a barley field installation came from history—barley was the earliest crop grown in Estonia and was grown in the area of Lasnamäe in circa 500-600 BC. Because the culture of barley growing was brought to Estonia from Russia, and the tramway stairs mark the border between Estonian- and Russian-speaking districts, the art installation carried an idea of integration for us. The aim of the barley field was to bring some contrasting softness, some life and progress to this industrial area, but also to encourage the locals to take steps towards changing their living environment, instead of waiting for the authorities to do it, given that the tram has still not arrived after over 40 years.

This project was founded by a crowdfunding campaign, built and cut with the help of volunteers. The soil—45 tons of it—was carried on the stairs bucket by bucket. By the end of September, the crop was ripe and we held a harvesting party for the stair-field.

We made the harvested crop a gift for the crowdfunders; some if it is now living a new life as jewelry, while some of it was taken to a laboratory for tests that will calculate air pollution levels of the area.

Throughout the summer, the stairs of barley offered the district a new puff of life—young, verdant seedlings growing and turning into a ripe yellow barley field, reminding us of the cycles of nature and life.

Thus far, the locals  and the media have given us only positive feedback, which is the most important thing; some of the residents of Lasnamäe have even contacted us to ask how to get the permissions to build their community gardens in Lasnamäe. And this was what our art installation was aiming for—to encourage people to make changes in their district themselves, not to wait for a tram that has not still arrived for 40 years. 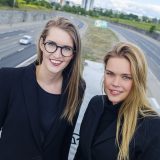 About the Writer:
Andrea Tamm and Ann Press

Andrea Tamm and Ann Press are second year Master's students in interior architecture at the Estonian Academy of Arts, but they have been working as interior architects for several years (Andrea for 5, Ann for 10). Their installation of a barley field on a set of "Soviet stairs to nowhere" is their debut as "farmers".

3 thoughts on “A Barley Field Grows on Soviet Concrete”

Over time, cities originated wherever indigenous cultures agglomerated and planned links between their settlements and peri-urban ecosystems for the provision of water, food and other goods and services. Not by coincidence, these settlements often occurred in biodiversity hotspots—and we know that historically cities were hotbeds for innovation of all sorts. Yet indigenous knowledge on the sustainable use of biodiversity has...

Many entries in this collective blog about the nature of cities will focus your attention on the nature that remains in cities, defined in terms of those patches of semi-natural habitat, the green bits, which are found in all cities,...

In this short essay my aim is modest and two-fold. First, I would like to share with you a story about an experiment in ecological-environmental-scientific-poetics that worked out beautifully. It worked so well that I believe it is worth sharing. Second,...