“Urban nature” is, for many people, a contradiction in terms. Urban spaces are all about control, hard edges, and the fabrication of an environment. Nature is wild, opportunistic, and fragile. Where is the overlap?

Yet for those of us who work in fields related to urban nature, we see that there is more integration between the two than might seem obvious at first glance. In 1978, G.W. Grey and F.J. Denke stated in Urban Forestry that most cities were forests based on the definition of a forest as an area where “at least 10% of the land is stocked with trees” (Rowntree 1984). While cities may not feel like forests, the role of nature in the built environment is a powerful one. City dwellers understand, perhaps because of its relative scarcity, that urban nature is as essential to creating the character of cities as buildings and streets.

I grew up in New York City on a block with a church on it, and not much else of note. This was on the Upper West Side of Manhattan, a relatively tree-d neighborhood compared to many parts of the city. Our block was lined mostly with honey locusts, with their distinctive dark, ridged bark, and bipinnate compound leaves that turn brilliant shades of yellow. Every year their fruit—long, twisty black pods—would spin lazily in the wind before falling to the sidewalk with a clattering noise. For me, these trees were some of the most defining features of our micro-neighborhood.

I also spent a lot of time in Riverside Park, one of the city’s “wild places”. It’s where we would walk the dog every day, and it was also the site of countless play dates, parties, and sporting events. Our school “field days” were held in fields on the lower level of the park, above the West Side Highway and with a clear view of the Hudson River. The topography of this part of the park is still quite steep, a remnant of when it was all rugged bluffs and rocky outcroppings There are many wonderful trees in the park, but the ones I remember the most distinctly are the Liquidambar. I always liked their starry leaves, and their prickly “gumball” fruit was good for kicking. In some parts of the park, there were so many of them, they would collect in a small ocean across the asphalt paths.

There was a giant pin oak adjacent to a lawn where a lot of people used to gather with their dogs (and probably still do). It was so large that you could easily duck under its drooping branches and wander around the cool, hidden interior. This is where I remember catching fireflies during wonderfully pink, languorous summer dusks.

Does that sound too idyllic to be a memory of someone who grew up in New York City? It isn’t. Green places make those experiences possible, even in the most developed urban places. And they infuse a place that will always and forever be known for its high-rises and busy streets with a deeper sense of place and character.

That my childhood memories are so enduring illustrates one of the most compelling features of urban nature, which is its ability to transform the character of a place by impacting how we feel about it—our emotional response to being there. One interesting quirk of human psychology is that we often fail to remember the specific features of a place that affect our experience of it. We may not notice, for example, that we gravitate to the shady side of the street, or that we choose our route home based on the quiet of a tree-lined block. Places that we want to be—streets that are safe, shady, and calm—don’t advertise their alchemy. They appear to simply work. In other words, we don’t remember how places look, we remember how they feel.

Discussions around urban character tend to focus on architecture and street design—and those are important. But I do think sometimes we prioritize aesthetic details over the experiential, what it means to actually stand somewhere and be immersed in a place. Ultimately, it is this experience of a place that comes to define it. This elusive goal is part of what makes successful planning so enduring, and also so challenging.

I’m not the only one who vividly remembers the trees of my childhood. There’s a reason the trees we grew up with remain embedded in the landscape of our memories: they mark the passage of time. 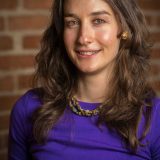 About the Writer:
Leda Marritz

Leda Marritz has worked in the urban forestry industry for over 10 years as Creative Director at DeepRoot Green Infrastructure; she is an ISA-certified arborist.


Bats — “they live in the dark, they eat your blood, they fly in your hair, and they spread diseases like Ebola”. At least that is what stereotypes have painted them to be Most people do not know much about...

27 February 2013 Urbanophilia and the End of Misanthropy: Cities Are Nature Mary Rowe,  Toronto

Jane Jacobs titled her sixth book The Nature of Economies (Random House, 2000). In the Foreword she makes explicit her intent: “The theme running through this exposition — indeed, the basic premise on which the book is constructed — is that human beings exist wholly within nature as a legitimate part of natural order in every respect. To accept this unity seems...

The world’s ecosystems are rapidly changing, and urban natural areas are often the first to exhibit these changes. The urban heat island effect and increased air, water, and soil pollution are some of the impacts of the increasing human imprint...