To truly learn the lessons from shutting down the Poletti power plant, we must confront environmental injustice and replace isolation with community. Among other things, that means electing politicians committed to social justice.
In 2013, the New York Power Authority razed the Charles Poletti Power Plant in Astoria, NY. In doing so, Power Authority removed what local elected official Michael Gianaris had characterized as a “symbol[] of pollution that haunted [the] neighborhood”. The characterization was an apt one. The Poletti Plant had for years been the single-biggest polluter in New York City. In 2000, the Poletti plant alone spewed 263,376 tons of pollutants into the airshed—more air emissions than the rest of the city combined. Not surprisingly, the surrounding community was part of New York City’s asthma alley: a band of elevated asthma rates that stretches from the Bronx through Queens. The plant posed a particular risk to the thousands of children in Astoria’s three major public housing projects, including Astoria Houses—largest public housing project in the United States. One local leader claimed that, as a result of the pollution, birds would not nest in Astoria. The story of shutting down the Poletti is a tale worth telling, and a potential template for successful environmental justice advocacy. 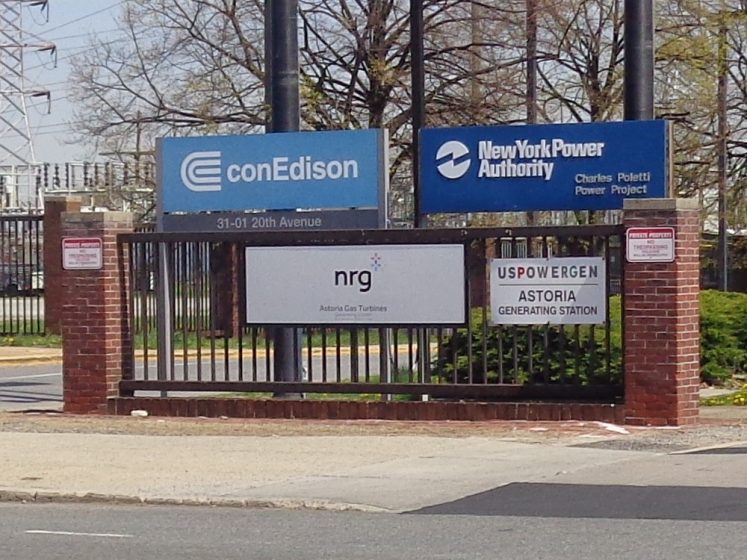 Beginning operation in 1977, the 885 megawatt facility was named for New York’s 46th Governor Charles Poletti. If there is anything in a name, the Poletti facility had an auspicious one. Charles Poletti graduated from Harvard Law School, served on the New York State Supreme Court, and been elected New York’s Lieutenant Governor alongside Governor Herbert H. Lehman. Poletti had the distinction of being the first Italian-American governor in the United States (albeit serving only 29 days to complete Lehman’s term after Lehman joined the World War II effort). During World War II, Lieutenant-Colonel Poletti was in charge of restoring essential public services in occupied Italy. After the war, New York Governor Averell Harrimann appointed Poletti to the New York State Power Authority. So, when the Astoria generating facility was named in his honor, it had a lot to live up to. Sadly, the facility was far less impressive than its namesake. Indeed, by the time Charles Poletti died in 2002, New York Power Authority was mired in litigation with angry neighbors bent on shutting the dirty, polluting facility.

The Poletti plant served the state and local government; generating electricity to run schools, public hospitals, government offices and New York’s extensive subway and electric commuter train system. However, the toll it imposed on the surrounding community of Astoria was immense. The Poletti Plant ranked among the dirtiest plants in the United States.

Despite this immense pollution load, New York Power Authority proposed to add a new 500 MW facility alongside the Poletti plant. Astoria was already home to 60% of New York City’s generating capacity and the local community objected to an additional polluting facility in their neighborhood. Their legal strategy was innovative, involving a coalition between Natural Resouces Defense Council, a national environmental group, New York Public Interest Research Group, a New York environmental group, and a community NGO called the Coalition Helping Organize a Kleaner Environment (CHOKE). Joining with local politicians, and public housing leaders, the coalition intervened in the administrative permitting process and challenged the issuance of a “certificate of environmental compatibility and public need”—a legal prerequisite for the new facility. The coalition argued that the community was already overburdened, and that the additional particulate pollution from the new, albeit cleaner facility would jeopardize public health and environmental safety.

While that proceeding was ongoing, another environmental justice group was attacking New York Power Authority from a different angle. In 2001, the Power Authority announced plans to install eleven additional natural gas turbine units around New York City. This plan was nominally in response to the rolling blackouts that California had suffered that summer (which were later revealed to have been caused by Enron’s market manipulations, not an actual shortage of generating capacity). Each of the proposed new units could generate 44 MW of power, and the majority of the units were to be placed in pairs at multiple sites around New York City. Thus, the paired units could together generate 88MW of power. Under New York Law at the time, any facility capable of generating 80 MW or more was deemed a “major generating facility”, a label that triggered a host of public hearings and certification requirements (called an Article X application). However, the Power Authority obtained an exception by promising that each pair would be configured to generate only 79.9 MW of electricity—just below the 80 MW threshold.

The Power Authority then concluded that there would be no negative environmental impacts from this project, and that the cumulative impacts of the proposed eleven turbines would be insignificant.

The anti-Poletti coalition used the UPROSE decision to its advantage, persuading regulators to order a hearing on particulate matter associated with the Astoria facility. This administrative ruling gave the coalition leverage that they used to strike a deal. In exchange for a withdrawal of coalition objections to the new 50 MW plant, the Power Authority committed to a six to eight year timetable for shutting down the dirty Poletti Plant, converting to the cleanest fuel available, investing in the community, and reducing the Poletti’s operation during the interim. So, the dirtiest plant in New York City was replaced with a facility reputed to be “one of America’s cleanest”. Perhaps learning from poor Poletti’s tarnished name, the replacement facility was simply called Astoria I.

In the years since Poletti shut down, the air quality in Astoria has improved markedly. Particulate pollutants have plummeted.

Asthma hospitalizations are down well below the average for New York City.

A cleaner environment has taken a toll on the community in a different way. Gentrification is rife, with property values increasing 75% in the years since the Poletti Plant was shuttered. Long-time residents are beginning to find themselves priced out of the neighborhood they fought to improve.

The saga for shutting down Poletti served as inspiration for Bina’s Plant, Book 2 of the Environmental Justice Chronicles soon to be released by the Center for Urban Environmental Reform.

I wish I had a brick from the Poletti. I would display it in my office as both a celebration and a reminder. Environmental justice victories are rare enough that they need to be savored, but it is vital that the benefits of those victories redound to all citizens, and that those who achieve those victories are not pushed out of their neighborhoods.

So what lessons does shutting down the Poletti offer for other similar campaigns? First, collaboration is key—local groups must lead the way, but they need resources and support from state-wide and national groups. Second, it helps when local politicians are fully on board. With the campaign to shut Poletti, elected officials joined the lawsuits, and used the platform of their office to advocate for environmental protection.

That sounds so simple. Yet, too often, institutionalized racism is a barrier to achieving the kind of cooperation that was so successful in the Poletti campaign. De facto segregation and racialized voting can leave poor and minority communities isolated in their battle against pollution in their neighborhoods. Air quality in those communities can stagnate or even decrease, even as rest of the city improves. For example, even though New York City now has the cleanest air since monitoring began, asthma rates are still unacceptably high in parts of the Bronx and Manhattan, with black and Latino/a children hardest hit.

We can and must do better. To truly learn the lessons from shutting down the Poletti, we must confront environmental injustice and replace isolation with community. Among other things, that means electing politicians committed to social justice. National environmental groups must also do their part to confront their past disengagement with issues environmental justice. Fortunately, this kind of rethinking is already starting to happen.


As 2017 draws to a close in the U.S., we are still getting our lives back in order, reeling from the human and economic losses of the recent hurricane season. Experts estimate that hurricanes Irma and Harvey combined will cost...

Rachenahalli is one of the few living lakes of Bangalore, in the north of the city. It is connected to water bodies upstream and downstream, particularly Jakkur Lake in the northeast. Both of these lakes have been rejuvenated, at substantial cost, by the Bangalore Development Authority over the last decade. A sewage treatment plant with a capacity to treat 10 million...

A review of Toward an Urban Ecology, by Kate Orff. 2016. ISBN978-1-58093-436-7. The Monacelli Press, New York. 272 pages. Buy the book. Kate Orff, one of the leading ecologically-oriented landscape architects working today, and her firm, SCAPE, have put together an...