Streets are often the biggest share of publicly-owned land in a city. All too often, they’re conceived and managed only as thoroughfares for motor vehicles. A whole set of standards has been imposed to judge the effectiveness of streets solely on the basis of how many automobiles they can move and how fast. The results, in cities around the world, are streets that are destructive of urban vitality, dangerous to human beings, and detrimental to the environment and economy.

Transportation infrastructure gets designed, built, and operated according to standards and established practice. The Global Street Design Guide, if adopted and applied, would dramatically improve those standards and practices in cities around the world.

The Global Street Design Guide not only challenges the out-moded expectation that cars should dominate a city, but goes so far as to provide new standards and designs that show how a more humane approach to streets can be implemented. It starts as a manifesto about why city streets should be designed differently, then goes into detail about how to actually do it, before concluding with case studies showing how it has actually been done. 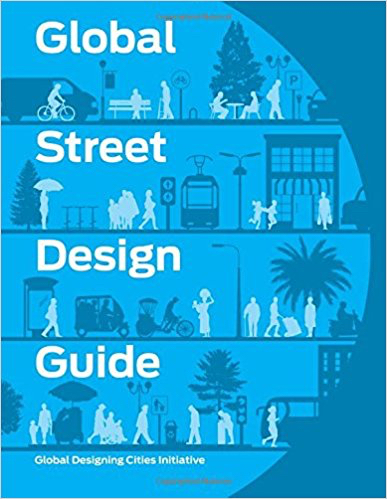 A citizen activist in the southeastern United States once said, “We pushed and pushed our city government to create safer streets for people, but they refused and said, ‘We do things by the book.’ ” She went on to say that the activists realized that the book was quite literally a book, developed by highway engineers, with the sole purpose of optimizing streets for automobiles, without consideration of any other priorities. The activists concluded, “We realized that the city was never going to not ‘do things by the book,’ so it dawned on us, rather than asking them to throw the book away, we needed to give them a new book!”

The Global Street Design Guide is that book. Funded by Bloomberg Philanthropies, it was produced by practitioners in a network of progressive cities on six continents. Their peer practitioners are a crucial audience for the book, but that is not the only audience. Most often, change in urban politics starts with resident activists who are outside the conventional agencies: neighborhood residents concerned about excessive car traffic, health care professionals who recognize the impact that air pollution, traffic violence and sedentary lifestyles have on public health, or business associations who realize that auto-oriented strip development quickly turns to blight and disinvestment. These passionate citizens aren’t transportation experts, but they grasp the fundamental truth that automobile dominance is harming their communities. By reading the introductory sections of the Global Street Design Guide, they will become just expert enough to press their city leaders with the demand that streets be improved. Those city leaders, whether mayors or city council members or finance directors or public works directors, are another important audience for the introductory chapters, which make a compelling case that streets can and should be redesigned in a variety of ways. The well-designed book is refulgent with pictures and attractive drawings that illustrate just how things can be different, with powerful examples from a variety of contexts around the globe.

Once the activists recognize the potential for change, and prevail on municipal leaders to embrace it, the Global Street Design Guide serves its main purpose: as practical direction for the agency staff members who are charged with implementing new approaches. The heart of the book is a well-organized catalog of street typologies for a wide range of uses, with technical guidance on how each feature or technique can be applied. For example, a street with a high-capacity transit corridor will have a different spatial manifestation than a side lane that is more suited for local access. An intersection with abundant retail sites should be designed differently than one near a grade school.

By recognizing the joyful complexity of urban life, as well as the reality that different nations and cultures have different resources and needs, the Guide inevitably debunks the one-size-fits-all street design manuals that originated in the mid-20th century and should now be put in the dustbin of history. The Guide explicitly recognizes societal interests and social priorities beyond the pure movement of cars. Notably, the important role that streets play in handling rainwater and other run-off is given a prominent section, with examples of green infrastructure. The potential for economic development, and streetscapes that attract customers and retail spending, is another example of another feature that the Guide recommends quantifying. All these measures of success—reduced fatalities, cubic meters of rainwater run-off treated, dollar value of economic vitality—are the performance measures that the Guide puts forward as a comprehensive substitute for the old unitary metric of how many cars a street can move and how fast they move. In some cases, that outmoded metric actually needs to be inverted, because volume and speed are in many cases antithetical to the more important goals a particular street should serve.

The Global Street Design Guide is the multi-national cousin of other guides intended more specifically for the U.S. market, produced by that country’s National Association of City Transportation Officials. The series, which has much more of a U.S. domestic focus, includes the Urban Street Design Guide

, and a Transit Street Design Guide

. (Disclosure: this reviewer was involved in providing philanthropic support for the latter.) This canon of works should be useful in North America, Australia and New Zealand, while the Global Street Design Guide has relevance to those regions but also the rest of the world, at any level of development.

Transportation infrastructure gets designed, built, and operated according to standards and established practice. The Global Street Design Guide, if adopted and applied, will dramatically improve those standards and practices in cities around the world.

To buy the book, click on the image below. Some of the proceeds return to TNOC. 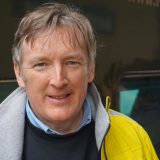 About the Writer:
David Bragdon

David Bragdon is Executive Director of TransitCenter, a foundation dedicated to improving urban transportation, and was formerly President of the elected Metro Council in the region of Portland, Oregon.


To plan resilient cities is a complex task. It involves making decisions that involve the built, social, economic, and environmental development of a territory, including unexpected changes, such as those caused by extreme natural events. The effects of earthquakes, tsunamis,...

The current system of zoning and planning is wrongly fixated on maintaining state instead of preserving good patterns, and changing this fixation will be the key to making growth beneficial to all civic stakeholders. The most contentious issue in North American urbanism today is preservation. More than transportation, more than usage-zoning, more than health and safety, more than growth, which...

30 November 2017 Biodiversity vs. Livability: What to do on the Victorian Western Volcanic Plain? Meredith Dobbie,  Victoria

What to do when biodiversity ideals conflict with livability imperatives for a city? A fascinating example of this tension is the western suburbs of Melbourne, the capital of Victoria, Australia. The greater metropolitan area of Melbourne lies on several bioregions....