The bat is the only flying mammal that is present in most cities over the world. But unknown makes for undesired. Due to COVID-19, the reputation of bats is even worse than before, but bats have a lot to offer to keep our cities green and liveable. Let us increase positive and spontaneous encounters of the bat-kind.

Bats — “they live in the dark, they eat your blood, they fly in your hair, and they spread diseases like Ebola”. At least that is what stereotypes have painted them to be Most people do not know much about bats. Since COVID-19, the reputation of bats is even worse than before. But bats have a lot to offer to keep our cities green and livable. Insect-eating bats help in preventing plagues in our urban parks and near our houses. A common pipistrelle bat eats over 300 small insects like mosquitos (which helps me sleep better at night). Fruit-eating bats help pollinate flowers and they assist in dispersing seeds for forest regeneration. And my personal favorite; they are spectacular aerial acrobats and always spark the curiosity of kids. Bats are a great way to get people in contact with local nature. How can we turn this bat reputation into a good reputation?

The bat is the only flying mammal that is present in most cities over the world, I presume. But unknown makes for undesired. I would like to share some examples of raising awareness on bats in cities to help urban ecologists and other conservationists to turn the tide on the bat reputation. I wish to open up opportunities to tell the true story of how bats help our cities stay livable. This will raise stewardship for bats and also for other urban animals.

So, let us increase positive and spontaneous encounters of the bat-kind.

As I learned at the TNOC summit in Paris, appreciating nature starts with emotion. Bats evoke the emotion of fear, because they can only be seen at night. This mystery of an animal rarely seen creates an extra interest in people. I know from my own experience that kids love to be outdoors at night. This adds the extra emotion of adventure and finding bats makes this even more exciting.

If we look at the examples above, we discover these emotions:

I hope these examples inspire you to put some effort into helping turn the bat reputation into a good one. I look forward to any other examples.

On the Nature of Cities

Cavity Trees in Urban Areas – Development of a guideline for preserving a valuable habitat in parks and urban forests, taking into account road safety. City of Frankfurt am Main, Environmental Agency

The maneuverability of a bat in flight makes even Harry Potter’s quidditch performance look downright clumsy. While many people may be content to simply watch these aerial acrobats in wonder, Kenneth Breuer and Sharon Swartz are determined to understand the detailed aerodynamics of bat flight – and ultimately the evolutionary path that created it. 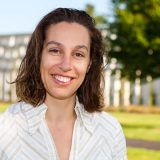 About the Writer:
Kasper Snel

Gitty Korsuize works as a urban ecologist at the city of Utrecht. Gitty connects people with nature, nature with people and people with an interest in nature with each other.

Fungi, that bizarre kingdom that includes yeasts and mushrooms, can be partnered with for healthier outcomes in urban natural areas and landscapes. Fungi, which are not plants and are more related to animals, are masters of chemistry. Enzymes created by fungi have been found to digest cigarette butts, DDT, and wood. They can transform wood into soil and polycyclic aromatic...