(Nota: A versão em Português segue imediatamente.)
The tropical urban landscapes of Rio de Janeiro, a city of 6.3 million inhabitants, are really impressive and unique. It is the outcome of five centuries of nature-human interaction. Last week UNESCO elected part of the city as a World Cultural Heritage.

It is quite meaningful that most of the selected images show the high biodiversity Atlantic Rainforest that have regenerated after centuries of natural resources exploitation and agricultural practices that had eliminated most of the native land cover (http://whc.unesco.org/en/list/1100/ viewed 07.05.2012). Actually the forests are fragmented, surrounded by dense urban occupation, and under pressure of further expansion repeating the same mistakes made in the past. The urbanized areas occupy mainly the lowlands, where ocean lagoons and wetlands were land filled with the devastation of several hills. One of the elected sites, the Flamengo Park, is a huge 1.2 km² created land, where the world renowned landscape designer Roberto Burle Marx was responsible for the magnificent gardens.

In the Tijuca massif, where the famous Christ the Redeemer oversees the city, coffee plantations replaced forests and then were abandoned leaving a grassy and dry landscape until the XIX Century, when their slopes were partially replanted to restore the water sources. Nature took care of the rest, with the regeneration of vast areas of the two major massifs: Tijuca and Pedra Branca. Both are protected areas today. Tijuca National Park is one of the UNESCO elected sites. In the last 25 years a successful city reforestation program called “Mutirão Reflorestamento” (“common effort to restore forests”) has effectively replanted trees on slopes to prevent landslides, mainly close to the favelas. It is a social-ecological program because local people are hired and trained to work in the planting and monitoring process, becoming stewards of the forest.

Although nature is present in our scenic views, the urbanized areas are heavily impervious and gray, especially in the Northern zones with almost no remaining green areas, not even public squares. The city has diverse environments, with pleasant forests and nice parks contrasting with arid, hot and noisy streets where the majority of the population lives. Most of the time the city is fairly hot. For instance, today is winter and the temperature is 29°C (84.2°F) at mid-day. I live very close to the forest, where it is quite pleasant with many trees, birds and insects. Native and invasive species are present, and should be permanently managed. Biodiversity abounds even close to the ecosystem remnants. In fact, if we let the windows open in the morning, monkeys (Cebus apella) come inside our apartment. Many residents feed them, consequently they keep coming back after easy junk food. Meanwhile, if I walk down one block, the traffic jam is constant, the temperature is much higher, and the street trees are old, under severe pressure in unsuitable situations, and many are dying and not being replaced.

People value the forested hills and the beaches mainly for recreation, biking, walking, hiking or just contemplating. I am not sure how they acknowledge and value the ecosystems services the forests and the urban trees provide. There is a great opportunity for further research about urban ecology and urban/regional landscape planning in Brazil, but there still isn’t formal education in these fields. Urban biodiversity and human-nature relations are not current issues in the majority of the Brazilian cities either, where in the last 20 years shopping malls and manicured gardens of gated communities are replacing open public spaces as recreation areas.

The decision makers in Rio de Janeiro do not make urban nature a priority. There is a lack of real comprehension of the role of biodiversity for a healthy city. The urbanized areas are subject to frequent floods and landslides because of the historic change in land use and vegetation cover. The World Cup and Olympic games that will take place here in the coming years drive a fast urban expansion that follows the same land cover pattern transformation in the remaining lowlands located in the western zone, in the Jacarepaguá and Guaratiba watersheds. Wetlands are being filled to create land for new expressways (cars and BRT’s) and by the real estate speculative process. The last legally protected mangrove remnant is under threat of excessive salinization because a new highway was built with traditional engineering techniques that interfere with the hydrologic flows, block the fresh water in the residential side, and, according to residents, cause more severe and recurrent floods. Other roads are under construction with no care for the landscape ecological processes and flows, eliminating biodiversity and changing water flows.

On the other hand, the City’s Environmental Department is working on a new Green Corridors plan to reconnect fragmented forested patches and to try to contain irreversible ecological damages in the urban expansion areas. Celso Junius, the head of the Mosaico Carioca, together with 20 specialists from 8 city departments constituted the working group that developed the initial proposition for the Green Corridors (available at http://mosaico-carioca.blogspot.com.br/search?updated-max=2012-05-23T22:41:00-03:00&max-results=3). The Environmental Department has done a great job of mapping all the Atlantic Rainforest ecosystems fragments and making it available on line ( http://sigfloresta.rio.rj.gov.br/ viewed 07.05.2012). “Sigfloresta” mapping is an important tool to effectively monitor the land cover in real time and is being used to develop the Green Corridors plan.

Design that Mimics Nature in the City

INVERDE is collaborating, on a voluntary basis, to further develop the green infrastructure plan, focusing first on the Jacarepaguá watershed, where the construction of many of the Olympic venues is driving urban expansion with high impact on the ecological landscape. The watershed is vulnerable to sea level rise, with most of its area no more than 1 meter  above sea level. The wetlands and the low areas are being landfilled and rivers are being rectified and channelized.

Pierre Martin, a French landscape architect (partner of Embya studio located in Rio), and I are committed to helping improve the final report for the “Olympic Green Corridors”, which will link fragments of Tijuca and Pedra Branca massifs through the Jacarepaguá lowlands.  The objective is to deepen and illustrate the proposals at the watershed and the site scale for a better understanding of the huge opportunities there are to shift to a new paradigm of social-ecological multifunctional and high performance urban landscape planning and design that mimics nature in the city.

We also believe that education and raising public awareness is vital to gain support for the proposition. We coordinated and recorded an open lecture at INVERDE in May 2012, which will be available on Youtube soon. We also co-organized a seminar with the City Environmental Department and the Botanic Garden Research Institute during the Rio+20 congress. It was an official event that focused on specialists and scientists working together to enhance the plan with a scientific foundation.We are all committed to taking this plan further on a continuous basis, with more research on urban ecology to better understand the abiotic and biotic processes and flows, as well as social-ecological relationships.The idea is not to greenwash the urban expansion, but to shift to a new transdisciplinary planning process and to design methods that incorporate science-based social-ecological knowledge.

There are already local examples of ecological restorations that were designed by Fernando Chacel, a pioneer landscape architect with a systemic vision. He planned and designed state-of-the-art parks along the lagoons of Jacarepaguá, the urban expansion lowlands where Rio+20 took place. He started the designed restoration of the lagoons riparian corridors in 1980’s until he fell sick in 2009 (unfortunately he passed away last year). He recomposed degraded landscapes, beautifully reintroducing native ecosystems and respecting the phytosociology. He worked with a multidisciplinary team.

His legacy must be known, and therefore serve as inspiration to new professionals: he developed the “ecogenesis” theory, where he learned from nature to restore degraded mangrove, sandbank and wet forests. His book Landscape Architecture and Ecogenesis should be available in all Brazilian schools (it is in Portuguese and English).

Rio de Janeiro has an enormous potential to be one of the greenest cities in the world, not only in GHG emissions mitigation or garbage collection and disposal (main targets of this administration).

The urban scale green infrastructure is outstanding and should be preserved and enhanced through the connection of the forest remnants, so they can exchange genetic faunal and floral material, in addition to providing clean human mobility for pedestrians and bicycles.

It is urgent that our decision makers have a real understanding of the role of urban biodiversity for healthy, safe, sustainable and resilient communities. Urban nature may offer numerous ecosystems services where people live, work and play: along the streets, in renaturalized canals, in roofs and yards, and in high performance, designed parks and squares with dense plantings of native trees. 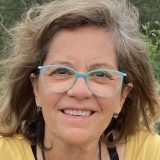 About the Writer:
Cecilia Polacow Herzog

Urban Landscape Planner. Cecilia is a lecturer and professor at Pontifical Catholic University of Rio de Janeiro in the Department of Architecture and Urbanism, where she runs the master’s program on Ecological Landscape Planning and Design. Her main interests are: how to integrate urban ecology and urban planning and design to adapt cities to the contemporary challenges of climate change, loss of biodiversity and ecosystem services.

12 thoughts on “Connecting the Wonderful Landscapes of Rio de Janeiro”

For all the critical scholarship that is written about the harnessing of volunteer labor in caring for urban trees (see, e.g., Perkins 2009), it never squared with my experience of engaging in stewardship. Following attendance at a human geography panel...