Botanical gardens (BGs) are places where people like to be. They provide not only amenities and relaxation for the visitors but opportunities to learn about plants and their environment. In many cases they represent one of the few opportunities for city dwellers to connect with nature. At the same time provide an exceptional introduction to conservation issues.

From their early days in which botanical gardens grew medicinal plants, to the time in which they created extensive botantical collections, and until now, BGs have been appreciated as places of wonder. However, as centers of species introduction BGs also contributed to the introduction of invasive plants with subsequent negative impact in many ecosystems. Most invaders have been introduced for horticultural use by nurseries, botanical gardens, and individuals (Reichard and White 2001).

With the increase of ecological consciousness beginning in the 1970s and the extraordinary increase of the urban population all over the world, BGs have assumed a strong role in protection of species in their original habitats and restoration programs, maintaining nature reserves and, in some cases conserving large fragments of natural vegetation in urban centers. In so doing BGs have become key actors in the implementation of International Agendas, such as the Convention on Biological Diversity, the Framework Convention on Climatic Change, and Agenda 21. This is the reason why today they are a blend of attractive urban green and key actors for environmental education that allows people to recognize the value of nature and promoting an adequate environmental behavior.

In this blog I want to share some experiences carried out in Latin American and Caribbean BGs showing the shift in understanding toward an holistic vision of biodiversity, which focuses not only on plants but on different kinds of communities and environmental activities.

During the last century many cities in Latin American and Caribbean have ignored the green elements of their urban designs, the ecological and scenic potential offered by their natural surroundings and the value of the native flora. Immigrants brought with them the gardening traditions and plant preferences of their countries, and so most cities have prototypes of design styles and planting choices from Europe. Only few landscape architects, such as like Burle Marx or Carlos Thays, were fascinated by the majestic native flora and included native trees with outstanding flowers, stems or foliage in their projects.

Today Latin American and Caribbean BGs are leading the reconnection of people with the local nature. As a result many BGs have programs preserving germplasm of threatened species, and carry out rehabilitation and restoration projects. Thus, the role of BGs has expanded.

Tania Sampaio Pereira and colleagues in Rio de Janeiro Botanical Garden, Brazil are working on in situ and ex situ conservation specifically for the regeneration and restoration of the Atlantic forest, which is one of the most endangered ecosystems in Brazil. They are restoring the forest inside the BG and also along some riverbanks in the metropolitan area. Pinheiro, in Sao Paulo, Brazil showed the importance of municipal botanical gardens for the in situ conservation of the flora of the regions where they are located. 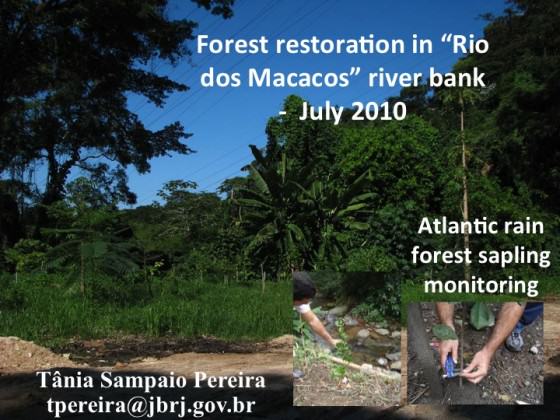 A similar project for the restoration of dry forest was implemented by the BG of San Carlos Centro in Santa Fe, Argentina. The main objective of this work is to stop the loss of genetic diversity of species by the advance of industrial activities or urbanization — that the native forest surveyed 60 years ago has been reduced to only 20% of its total. Many actions have been launched with the participation of the  local community (e.g., seed collection, creation of a gene bank, restoration). 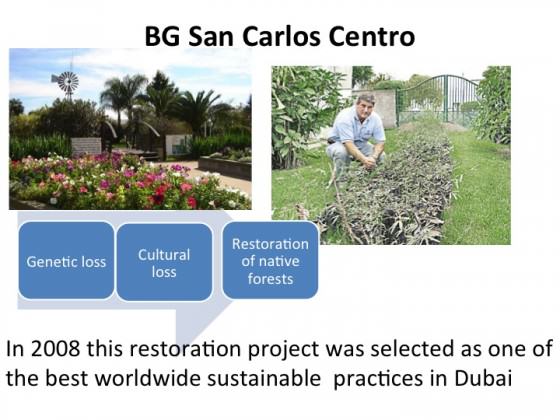 The BG of the Argentine Museum of Natural Science, in Buenos Aires, is dedicated to the enjoyment and conservation of the flora and vegetation of the Pampa region. The small (0,5 ha) garden in the middle of the city is a network of paths winding through grasslands and forests and has an educational program to call people’s attention to the importance of the local flora. The staff is involved in a participatory restoration project on the riverbanks of the Buenos Aires metropolitan area, helping the city administration to make ecologically sound decisions in vegetation management. At the same time they are investigating how people experience and perceive urban green spaces. Such knowledge of the value that people place on urbn greencan be used by the city administration in designing sounded spaces as the valuation that people have of urban green matters. It brings to mind deep emotions and can mobilize strong attitudes towards a sustainable use. 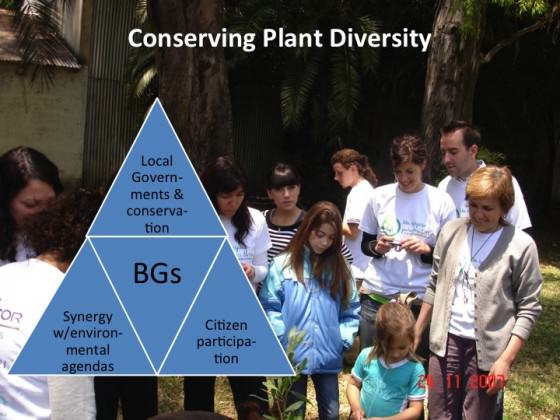 Many BGs are involved in programs concerning street trees. While in Santo Domingo endangered and endemic native trees are planted, in the Brasilia BG many orchids from the Cerrado Biome are propagated by in vitro culture, propagated and placed on trees along the streetscapes. In Ecuador BGs have been advising the municipal administration on local and regional reforestation, promoting the use of native species. They have been also key actors concerning care, rehabilitation and release of wild animals promoting public awareness about the preservation of wildlife. 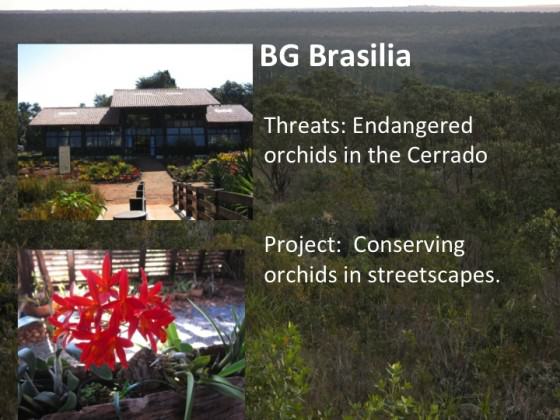 The examples described above show that Latin American and the Caribbean BGs are working on an integrated model of multiple dimensions and generate an urban landmark able to create synergies between the exurban and urban environment. Among the dimensions that BGs address should be mentioned the promotion of culture, including environmental rehabilitation of urban and architectural heritage of their buildings, the conservation and management of biodiversity, the generation and transfer of environmental knowledge and policies for social and economic development as inevitable companions of all dimensions. In so doing they have adopted a partnership approach at both the local and national level between actors of different natures, which explains the possibility of taking action with relatively small budgets.

Why have BGs been successful? They are icons central to the city with high social recognition combining at the same time research, agronomic practice and good connection with the community.

4 thoughts on “Botanical Gardens: More Than Places at Which the Plants Are Labelled”


I have long been a believer in E.O. Wilson’s idea of biophilia; that we are hard-wired from evolution to need and want contact with nature. To have a healthy life, emotionally and physically, requires this contact. The empirical evidence of...

Of all the cities in America, Detroit, Michigan may provide us with the best opportunity to discover how to create a connection to nature within an urban population. Detroit is a place of glass and asphalt and steel juxtaposed block by block with wild prairies, emerging woodlands, and re-emergent wetlands. We are immersed in a kind of new nature here,...

In an increasingly urbanised world, there is a growing disconnect between the people who live in cities and the natural environment. Urbanites tend to have less contact with natural habitats and biodiversity than their country or rural counterparts, and in...