What would you do if you had the opportunity to design and build a new village or city? These opportunities do not come around often, so when one does we have to make the most of it!! The opportunities abound in Christchurch after the devastating earthquakes of 2010 and 2011. Now a new city must be built!

For some background and to see the amazing opportunities available in re-building a new city watch this short video: http://vimeo.com/46589834

As part of the city rebuild a competition was established. It is called “breathe”—the new urban village project….. an international competition to design and build a new place for living in the Central City.

Designers and developers from all around the world were invited to submit entries for a sustainable and commercially viable urban village for Christchurch, to inspire fresh creativity in the city’s rebuild following the devastating February 2011 earthquake. The challenge was to develop a concept for medium density living—a new urban village that provided a variety of housing options and lifestyle choices based on sustainability, innovation and a strong sense of community. Architects were given three months to create a concept in three drawings that would change the way people think about urban living, by designing an exemplar housing development that will be the catalyst for modern urban living in the heart of the city, and attract a new and diverse residential community back into the Central City.

The four finalists now have three months to take their initial concepts through to a more developed design. The winning concept will be built adjacent to Latimer Square, offering its residents an exceptional quality of life, with local parks, entertainment, recreational facilities, and the central business area nearby.

Being an alternative life-styler, an ecologist, and an advocate of anything green, sustainable and native it is not surprising that my favourite of the four finalists is The Viva Project. [Full disclosure: I am not a judge for this contest.] Viva! is an exciting project that was initiated by a group of Christchurch people committed to actively promoting sustainable developments for the central Christchurch rebuild. The team’s vision was:

“to create a vibrant urban village, an innovative and inspiring example of sustainable design and connected community.”

The Viva folks have been collaborating with Jasmax on the development of their entry in the competition. Together, their unique strengths make for a powerful combination. Viva! represents the collective voice and participatory leadership of the people of Christchurch and Jasmax brings its cutting edge design experience, as well as the sustainable values of the Living Building Challenge, “the built environment’s most rigorous performance standard.”

“The collaborative vision for the ‘Living Village’ community is to create an innovative village model, based on social, environmental, cultural and financial sustainability. The design incorporates a housing model that optimises the needs of the individual as well as the wider community.”

The judging panel, including international judge Kevin McCloud from the UK commended the design stating:

“The village uses natural materials and native plants to harness rainwater and capture energy from the sun to deliver an exemplar of ‘one-planet’ living. The design delivers a strong sense of place and community created through its diverse housing and shared amenities surrounded by an inviting garden city setting. A further strength of this unique community-based development model is that its modest approach addresses housing affordability issues.”

The judges particularly praised the strong community involvement and very high sustainability standard. This Living Village is based around three courtyards with a community centre near the heart and a mix of houses, apartments and a small amount of retail. It is net zero energy, very efficient in water use and the physical design encourages a strong sense of community, with many informal gathering places and layers between private and common areas. The landscape and architectural design acknowledges the history of the land, its natural environment and the cultures that have passed over the land.

“Being selected to progress onto the next stage of the competition is a huge honour and an endorsement for all involved in this ‘people-led’ design. We believe that the Living Village will serve as a flagship example of what can be achieved not only in Christchurch, but around the world. We also commend the organisers of the competition for giving the people of Christchurch the opportunity to have an authentic say in the rebuild and revitalisation of their city.”

Wow! Maybe Jane is onto something here!

If you would like to know more about successful eco-villages in New Zealand then I urge you to check out one of the most well known, the eco-neighbourhood in Auckland called Earthsong. The founders of Earthsong were committed from the very beginning, in 1995, to building a neighbourhood that was as socially and environmentally sustainable as possible, with a vision:

“to establish a cohousing neighbourhood based on the principles of permaculture, that will serve as a model of a socially and environmentally sustainable community.”

Here is a recent snapshot of the village, about 12 years after establishment in 2001. 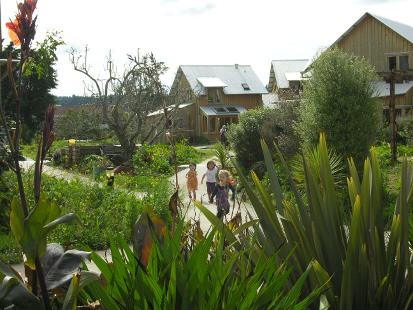 About the Writer:
Glenn Stewart

4 thoughts on “How Would You Design an Urban Eco-village?”

Cities pledge to reduce emissions and fight climate change—but do these commitments measure up? The transport sector makes up nearly one-third of urban emissions, a factor influenced by distances traveled and modes of travel. Most cities focus on policies to...

Once upon a time the city was called the “marvelous” one: Rio de Janeiro, cidade maravilhosa. Rio was the birthplace of samba, chorinho and bossa nova; internationally famous for supposedly being a city of fun and carnival 365 days a...

Cities are ecological spaces.  But only relatively recently has this new vision of ecologically sophisticated cities gained momentum.  Today, in increasing numbers, scientists, designers, and practitioners create useful knowledge about the nature of cities through study and research that can...