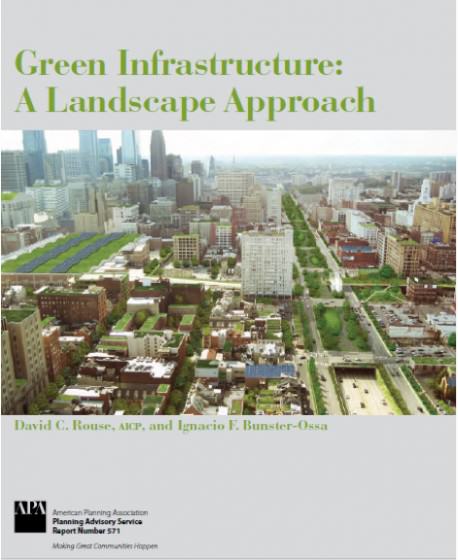 This PAS Report, in line with the current principles of sustainability, discusses green infrastructure (GI) as the visible expression of natural and human ecosystem processes that work across scales and contexts to provide multiple benefits for people and their environments. Unlike other approaches that envision green infrastructure from the standpoint of social infrastructure (e.g., by building capacity in improved health, job opportunities, community cohesion, etc.), this report addresses it first within the matrix or context of hard infrastructure.

The authors D. C. Rouse and I. F. Bunster-Ossa, two landscape architects and designers, along with contributions from a number of professionals, transmit their holistic views of an integrated landscape, in which ecology, community health and identity, infrastructure, recreation, and public art merge. They also urge professionals involved in these issues to apply multidisciplinary and interdisciplinary approaches in their projects.

The authors renew the holistic call of many anonymous voices from distant civilizations and seminal work from the 19th and 20th centuries to work with Nature and not against it. The need to interconnect natural or “green” systems with the ecosystem services they provide to sustain a functioning community is not new. This concept was applied by many ancient civilizations and held up by important professionals like Penn (1681), the Olmsteds (1870-1900), the Eliots, Manning (1923), McHarg (1969) and A.W.Spirn (1984) and by concepts developed by the present sustainable, ecological and biourbanism. Unfortunately this conception lost strength with the advance of modernity, and because involved professionals have tended to operate independently of one another. Nature devaluation became apparent by the middle of the 20th century, engineered infrastructure eclipsed landscape as the primary driver of urban development. The progress of urbanization and associated infrastructure (roads, utilities, and flood control works), based on hard engineering, had huge and exponential impacts on the landscape, increasing problems instead of bringing solutions.

Rouse and Bunster-Ossa show clearly that GI is a complex system, that spans planning and design disciplines, urban, suburban, and rural contexts and scales. As a term, GI is relatively new to the lexicon of urban planning and landscape design. It appeared in the late 1990s with the intent of elevating the societal value and functions of natural systems to the same importance level as grey infrastructure.

In four chapters the authors present GI as a multifunctional system with components (trees, soil, and constructed infrastructure); organized into a pattern (the landscape); and that performs functions (e.g., stormwater management and the removal of air and water pollutants) that provide benefits. Moreover, they note that GI is part of a hierarchy: it incorporates multiple subsystems (e.g., hydrology, vegetation, and movement) and in turn is a subsystem within a larger system (e.g., region, city, or neighborhood), where it interacts with other systems such as transportation, economy, and governance.

Chapter 2 elaborates on the evolution and basic attributes of GI as a multifunctional system. Chapter 3 addresses its implications for practitioners, with a focus on integrating the work of urban planners and landscape architects. Here the authors bring a set of six unifying principles that can be used by different professions to advance green infrastructure solutions at different scales. In each GI planning practice the principles of multifunctionality, connectivity, habitability, resiliency, identity and return on investment must not be forgotten. Half of the report—Chapter 4—is devoted to eleven American case studies illuminating examples of green infrastructure at the regional scale, in large cities and in smaller communities. Four of these examples discuss parks, greenways, and river corridors. As a bonus, at the end the authors show how the reported case studies embody the six principles laid out earlier in the report.

The Appendix includes a model of an integrated regulatory framework for GI that brings together existing regulations and review processes with new approaches to optimize the interactions between natural and built systems.

The key chapter in this book—Chapter 3—shows how, planners can plan and promote green infrastructure to achieve triple-bottom-line benefits at different scales in different contexts, strikingly presented using the six principles  mentioned above.

Green Infrastructure: A Landscape Approach gives the reader a framework for a sustainable urban and regional future, how can it be implemented, and how  planners and designers can play leading and responsive roles in addressing these issues. Although this report was intended for planners, landscape architects, architects, civil engineers, scientists, and others interested in the spatial structure, functions, and values (environmental, economic, and social) of natural and built landscapes, its simple and enjoyable writing makes it useful for educators, students, citizen groups and conservationists. While all case studies were drawn from communities within the United States, implementing the mentioned principles through green infrastructure initiatives, the variety of contexts and scales make them applicable worldwide.

I strongly recommend this book.

2 thoughts on “Complex and Useful, Green Is Infrastructure”

Efficient land use for urban development is crucial for limiting urban sprawl, conserving nature around a city, and improving the livability of the city itself. In China, the unprecedented speed of urbanization over the past three decades has unfortunately resulted...

Edward O. Wilson popularized the concept Biophilia more than 30 years ago, in 1984, describing it as “the urge to affiliate with other life forms”. In short, Biophilia is a hypothesis that suggests the innate affinity of humans towards nature. We agree that humans possess the tendency to seek connections with nature—whether as a place for escape from the busy...

Arid cities around the world Over two years ago, my colleagues and I at Arup began a research project focused on the topic of planning and designing cities in arid environments. We were initially interested in exploring the most relevant...