“…and thus we layered a continent with asphalt and linoleum.”—Eric Sanderson (Terra Nova)

In 2010, Brooklyn’s Prospect Park West was transformed with a protected bike lane and pedestrian refuges. Overnight, speeding traffic was replaced with lighter, calmer car flow and increasing throngs of families walking and cycling to the adjacent park. The project nonetheless met fierce opposition from residents upset about the loss of driving and parking space, and it was not long until these local opponents took to public protest. “Your Bike Lane? Not on my Speedway!” and “Don’t be Conned by Sadik-Khan” read a few of the more outrageous signs. Of course, we responded with our own counter-protest. My friend and fellow sustainable streets advocate, Aaron Naparstek, was there. He was clutching Transportation Alternatives’ battery-powered megaphone and he was not afraid to use it:

“Right On!” I think I shouted. But to others within earshot, Aaron’s megaphone manifesto may have missed the mark. What the heck do bike lanes have to do with national security, anyway? 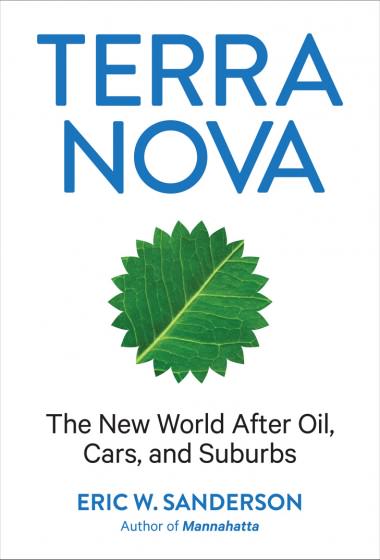 A lot, it turns out, but it’s a much longer story. In Terra Nova: The World After Cars, Oil and Suburbs, Eric W. Sanderson tries to tell it like nobody ever has, in 350 pages rife with detailed infographics and illustrations by Pentagram’s Eddie Opara.

If you read Sanderson’s last book, the acclaimed and best-selling Mannahatta: A Natural History of New York City, you know that, like Manhattan itself, he really likes to pack it in. Terra Nova is also crowded, like the future utopia it describes. There are a thousand facts here, and sixty-five pages of notes, citations and “elaborations” just for good measure. But the thing about density, as any urban planner will tell you, is that it yields unparalleled benefits if you are sure to layer in swift transportation and attractive open spaces. Sanderson does density right, sweeping his reader quickly from place to place, from a primeval history of oil to the collapse of the suburban housing market in 2008, to a convincing outline of a smarter future tax structure. And the gifted Opara provides plenty of eye-candy accompaniment, with more than 70 captivating charts and diagrams. (My favorite: ‘Tranportation Space’, which clearly illustrates the space-saving magic of walking, cycling, and surface transit).

But Sanderson is trying to do more than just take us on an entertaining and educational journey. He clearly wants this book to spark a revolution in how we live, and to do this he has to touch and motivate our souls. For this he deploys a few mythological frames, invoking Homer and Native American lore. The promise of the car was one of three seductive Sirens, and the heroic striving for a better world harks to the epic task of Nanapush, hero of the Lenape creation myth. These work pretty well, but they seem a bit forced. I think Sanderson would have made these devices more relevant and powerful had he used more modern versions of these ancient archetypes, or simply made some new ones up himself. If George Lucas can do it, so can a brilliant storyteller like Sanderson.

The pith of the book is Terra Nova itself, the blueprint outline for denser, greener cities coursed with alternative transportation and governed by smart taxes that discourage waste and reward thrift of our limited resources. But before he unveils this ideal future, Sanderson marshals history, physics, biology, chemistry, and economics to carefully explain why transitioning to Terra Nova is much more complicated than changing a light bulb, or swapping your SUV for a hydrogen fuel cell sedan. “The goal is to imagine a future without also having to appeal to some miraculous technological fix,” he says early on. Getting to a post-car utopia requires coming to grips with the systemic nature of our problem: decades of short-sighted decisions have warped our energy, economic, transportation, settlement and political systems into a grossly inefficient dependency on greenfield land and cheap oil.

Other authors have delved deeper into the history of the car in the city (Fighting Traffic by Peter Norton), the march of suburbia (Crabgrass Frontier by Kenneth Jackson), and the century-long consolidation of our transportation system into a monoculture of driving (Asphalt Nation by Jane Holtz Kay). James Howard Kunstler has done pioneering work weaving this all together, but with a touch of conspiratorial crankiness that has kept his important ideas on the fringe. Sanderson connects the big dots, but does it with the authority of a world-class science explainer, and without letting his ego get in the way. Even when Sanderson does occasionally lapse into eco-sermoning, he does it consciously and convincingly. We’ll move our bodies more in Terra Nova, and more daily walking, “combats depression, bolsters the immune system, fights osteoporosis, helps prevent diabetes, and improves sex life.” Preach!

I wish Sanderson spent more time on “Ramifications”, by far the shortest of the book’s three sections. Most of this section is dedicated to extolling the many benefits of trading resource extraction for renewables, sprawl for density, and cars for transit and human power. It’s important to point out the enticements—that there is future money to be made in retrofitting our systems and in selling streetcars. But much more interesting is the shorter subsection in which Sanderson treats the obstacles—we will have to pay more for gas, and give up the habituated convenience of cars and suburban living. And the biggest obstacle of all, evinced in the above-mentioned battle for Prospect Park West, is figuring out how to evolve past our NIMBYism, aversion to change, and new people using our street or moving into our neighborhood. While we mostly-accepting New Yorkers have by definition overcome this obstacle, we can still relate to Sanderson when he writes:

“One challenge that will come with living closer together is that we will need to face up to a social and psychological fact clearly in evidence in our democracy: other people can be really annoying. In the best of circumstances, density is fun and profitable; in the worst of conditions, it foments antipathy for humanity and certain individuals in particular.”

To solve the downsides to density, Sanderson calls for more tolerance, better urban design to give us peace and seclusion when we need it, and people-friendly public spaces where we can rely on Jane Jacobs’ ‘eyes on the street’ to bring out the good neighbor in all of us. This discussion of the cultural evolution required to reach the density requirements of Terra Nova is worthy of much more than a few pages, but perhaps here we have the seed of Sanderson’s next pioneering project, or the next George Lucas-produced motion picture. I eagerly await the next installment. 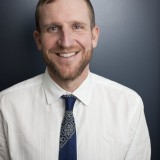 About the Writer:
Paul White

When I think about the just city, it’s always black and white I was born in Chicago the evening before President Lyndon Johnson signed the Civil Rights Act of 1964 into law. Growing up on the south side of Chicago meant that on an average day, I rarely saw or interacted with a person who didn’t look like me. All...

Governance, despite its own hopes for a universality of exclusion, is for the inducted, for those who know how to articulate interests disinterestedly, those who vote and know why they vote (not because someone is black or female but because...