Once again, something amazing and ephemeral has appeared in Detroit.

Flower House Detroit (which was actually located in the city of Hamtramck, 2 square miles enveloped by the city of Detroit) was, at its simplest, a gorgeous three-day floral installation in a two-story abandoned house. In reality, the project was much, much more.

Lisa Waud was inspired to create Flower House Detroit after experiencing the 2012 Dior Runway show, which had been staged in an abandoned house filled with flowers in Paris. As a floral designer based in a neighborhood with more than its share of abandoned houses, Lisa knew that she was destined to create an installation that would bring the wild spirit of the Dior show to her hometown. As proprietor of pot + box, a flower studio operating in Detroit and Ann Arbor, Michigan, Lisa was uniquely qualified to inspire a team of designers, artists, photographers and event planners to bring her vision to life.

Lisa has long been a fan of the work of Christo and Jeanne-Claude, the French artists known for giant, breathtaking art installations, and she knew that her piece should have that same, awe-inspiring quality. A flower shed just wouldn’t do the trick. Her vision demanded the presence of a grand old house, one of the kind that Detroit was known for in its heyday. The inspiration stuck with her and, two years later, she found herself at a county real estate auction “with her hand up.” For $500 she purchased two houses, located side by side, on a street adjacent to a freeway and not so far from her own live/work studio. That, in her own words, was when “sh+t got real.”

There is a lovely symmetry to the plans for the Flower House. An abandoned, ruined home was filled with flowers, made beautiful once again before facing its final demise.

One year, an Indiegogo campaign and a whole lot of planning later, the Flower House burst into bloom. The project was brought to life by a group of 37 floral artists, was visited by hundreds and was seen by thousands more through social media. Over 100,000 blooms filled 17 rooms; flower-filled tubs and toilets flowed from every bathroom, a 50s kitchen cabinet—trimmed in red and left behind—was stuffed full of coordinated flowers and vegetables. A dining room table grew out of a centerpiece of blooms, mosses and branches that reached from floor to ceiling and featured a self-contained water feature fed by a 50 gallon drum that had been sunk into the ground beneath the floorboards and filled with water.

From front porch to back stoop, warped floorboard to cracked ceiling, the Flower House was spectacular. Ticketed visitors were admitted in 20-minute intervals and encouraged to post their photographs using the hashtag #flowerhousedetroit. I came to the house straight from another kind of installation: a Greening of Detroit tree planting, where 85 new trees were planted on a nearby street. When I arrived, the whole street was bustling – no doubt with more activity than it had seen in years. The sidewalk was flanked with buckets of blooms and inspired visitors were encouraged to design bouquets of their own after exiting the house. A food truck was on site and visitors were queued up and gazing at the rear façade of the house, which had been covered with “Wild Floral Graffiti” reminiscent of exterior urban wall paper. On entering, visitors’ senses were engaged immediately. There was the happy hum of cameras clicking and visitors alternately whispering in awe and exclaiming with surprise, “Amazing!” “So beautiful.” “I might cry.” The smell was incredible – it was the rich warm smell of earth and fading flowers and long golden grass warmed by late summer sun. The colors were so rich, and the textures so varied, that it was impossible not to reach out over and over again, to confirm that everything was real. In room after room, the decay of a long vacancy was buoyed up by rafts of flowers arranged in the most amazing configurations of color and pattern and motion. “A Floral Whirlwind” spun in an upstairs bedroom, while another bedroom featured the bed that every little princess dreams about, strewn with flowers and bowered with an astonishing daisy chain. In the living room, the seat of a chair burst through with hundreds of stems. Every crack in the foundation, every wall where lath showed through ruined plaster, every hole where a fixture once hung, featured, for one weekend, something alive, and beautiful, and inspiring.

And then, it was over.

The Flower House was designed to last only a single glorious weekend. The web resounded with the anguished cries of those who didn’t get tickets to the sold-out spectacle. But the best may just be yet to come. Lisa Waud and her partners in the Flower House are committed to the Slow Flower movement,  which advocates for propagation and use of locally grown and seasonal blooms.  One of the most delightful aspects of the Flower House was that it made room for local flowers.  During installation, local flower farmers dropped off buckets of blooms to be added to the house, contributing to the unique character of the project.  This generosity is a hallmark of Detroit’s community of growers, and it was a most appropriate way to welcome Lisa to the fold, given her plans for the future. There is a lovely symmetry to the plans for the Flower House. An abandoned, ruined home was filled with flowers, made beautiful once again before facing its final demise. The installation, designed to be fleeting, was then dismantled and composted – 100,000 blooms returned to the soil. Next, the house will be deconstructed. At least 75 percent of the raw materials will be recycled for other projects by Reclaim Detroit, a program of the Detroit non-profit EcoWorks. And finally, the site will once again be made beautiful with flowers, this time as the site of a flower farm, growing blooms that will be used in more wonderful pot + box productions.

Detroit can’t wait to see what grows next. 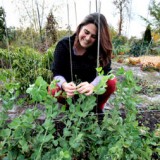 About the Writer:
Rebecca Salminen Witt

Rebecca is the President of The Greening of Detroit, a 25 year old non-profit environmental organization that works to secure the ecosystem of Detroit.


A review of Projective Ecologies, edited by Chris Reed and Nina-Marie Lister. 2014. ISBN: 1940291127. ACTAR, Harvard Graduate School of Design. 314 pages. Buy the book. Several months ago, I reviewed Landscape Imagination, a collection of essays by James Corner, a...

#watchingthericegrow is a hashtag I created on Instagram on 4 August 2016, tagging a photo I took from a bicycle survey along a winding rural road on the outskirts of Chiang Mai, Thailand. The initial framing marked a memorable composition at the center of a territorial survey that would spiral out from this center. The posting announced my commitment to...

“…as if refusing to be caught / In any singular vision of my eye / Or in the nets and cages of my thought, / They tower up, shatter, and madden space / With their divergences, are each alone /...