While it may have set a Guiness record for longest subtitle, Julie Feinstein’s Field Guide to Urban Wildlife caused me to reminisce about a birding class I taught many years ago. It was an in-service teacher’s workshop for novice birders. Having worked in the field with beginning birders for several years, I had become all too familiar with the, “oh, that’s just a…”. Which meant, of course, that the individual had written the bird off with a shrug and a superficial knowledge of the bird’s field marks, habitat, behavior, and individuality.

“Field Guide to Urban Wildlife” is replete with Feinstein’s sense of wonder, which cannot fail to rub off on her readers.

For the class, I decided that we would not name any bird throughout the daylong workshop. Instead, each time we saw another member of that species, we would assign it the same number. We followed that rigorous protocol all day, even though it was, at times, excruciatingly difficult to resist naming the bird.

By day’s end, we had accumulated a list of 20 species, each entry containing detailed descriptions of field marks, habitat, and behavior. Never again would those teachers mistake a Spotted Towhee for a Robin based on a cursory look at the bird. And never again, I hoped, would they say, “Oh, that’s just a Robin”. 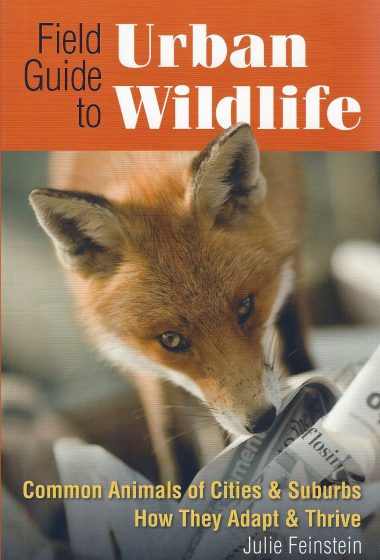 After reading Field Guide to Urban Wildlife, I cannot imagine Julie Feinstein ever saying, “Oh, that’s just a…”; to Feinstein, nothing is common. She makes that very clear from the outset in her introduction, writing, “Though urban animals live among us, sometimes even inside our homes, they largely go unnoticed. They are too commonplace. Yet there are moments, watching a fox in the backyard, discovering a centipede in the bathtub, or finding a bat asleep in the garage, when we wonder about them.”

This book is replete with her sense of wonder, which cannot fail to rub off on her readers, no matter how jaded they may be by the so-called “commonplace.”

The book will be equally appreciated by any “urban naturalist”, whether a rank amateur or seasoned professional, as Feinstein’s field observations and incredibly well-documented research reveal fascinating and illuminating factoids that are by turns humorous and horrifying. Her writing provides us with detailed life histories of everyday urban critters that are also replete with fun trivia, much of it gleaned from extensive literature searches. Meticulous research is Feinstein’s forte—unsurprising, given her professional position at the American Museum of Natural History and her own list of scientific publications.

One example of the obscure details common throughout the book is the revelation that opossums have a maximum land speed of 4 mph and sleep 18 to 20 hours daily, enjoying five hours of REM sleep in the process. She cites another researcher who discovered that taking two male mice and “anointing one of them with a third male’s urine resulted in the anointed mouse starting a fight with its former partner.” And, under an ultraviolet light, “mouse urine glows in the dark like psychedelic art.” We also learn that bathing your dog in tomato juice is not an effective remedy for the dog’s regrettable encounter with the neighborhood skunk. Fortunately, she follows that bit of information, having delved into Chemical Engineering News, with something that actually works to “de-skunk” your dog.

While we all are familiar with the generally friendly, but sometimes fraught, human/squirrel relationship—particularly between humans and the fox and Eastern gray squirrels, which are both the bane of every backyard bird feeder—few readers will know that Ronald Reagan routinely fed squirrels around the White House; indeed, the First Family featured squirrels in their 1984 Christmas cards. President Eisenhower, on the other hand, trapped and deported the squirrels to Maryland after they marred the presidential putting green with myriad holes. Feinstein goes on to describe squirreling counters with other presidents, including Carter, George H. W. Bush, and the Clinton clan, which, in “an era of appeasement”, gardeners provided with “peanut-filled feeders on the South lawn and Rose Garden to draw squirrels away from flower bulbs.” Interesting tidbits aside Feinstein also provides in-depth descriptions of common urban wildlife biology, ecology, and life histories. Such is the case with her descriptions of the fox and Eastern gray squirrels, including a detailed account of their interactions in North America and their invasion of England, where Eastern grays were introduced in the late 1800s.

Feinstein goes into great detail with one of the most common phenomenon that face parents accompanying their children to urban ponds—“ forced extrapair copulations”, or, to put it more bluntly, repeated gang rape of female mallards. While flummoxed parents may not be appreciably assuaged by the information, Feinstein provides detailed information as to the evolutionary strategy for this behavior. She has a great section on Turkey Vultures, including why they defecate on their legs, why they employe projectile vomiting as a defense strategy, why they lack feathers on their heads, that they play a role in the tourist trade at a Georgia state park, and that they have their very own fan club, The Turkey Vulture Society.

Her concluding chapters highlight insects and other arthropods, concluding with earthworms and slugs, subjects all too infrequently discussed in the context of urban wildlife. Among the more fascinating topics she explores are the grooming and mating behavior of centipedes; she even throws in a real groaner of a schoolyard joke on the topic. Given the recent spate of bedbug infestations across the U.S., her chapter on this most reviled pest will be of interest to her readers.

Feinstein’s writing style is user-friendly for the novice but also appealing to the specialist owing to her extensive citations of the scientific literature. The book is filled with high-quality photographs. Finally, she complements the book with her urban wildlife blog, www.urbanwildlifeguide.net, which she updates 4 to 5 times monthly, focusing on holidays such as Mother’s Day and Father’s Day, as well as the changing of the seasons.

I would rate Field Guide to Urban Wildlife as a must-read for urban naturalists of every stripe.

About the Writer:
Mike Houck

Mike Houck is a founding member of The Nature of Cities and is currently a TNOC board member. He is The Urban Naturalist for the Urban Greenspaces Institute (www.urbangreenspaces.org), on the board of The Intertwine Alliance and is a member of the City of Portland’s Planning and Sustainability Commission.

2 thoughts on “Urban Wildlife—Celebrating the Commonplace”


With the global urban population expected to double to around 6.5 billion by 2050, the future outlook for biodiversity can be positive, particularly if biodiversity is seen as a part of the solution to some of our most urgent development...


Guyana sits on what was once known as the “wild coast” of South America. The area was a dangerous swamp that struck terror in the hearts of European adventurers seeking the fabled city of El Dorado. Even Sir Walter Raleigh is rumoured to have come here in search of gold. The name “Guiana” is said to come from an Amerindian...

Urban schools—any public, private, or charter schools delivering formal primary or secondary education—are key institutions in the shaping of vibrant and sustainable cities. Imagining such cities depends on the assumptions and ideologies of those involved in the transformation of urban...