The power of the natural world to energise creativity has of course long been understood by artists, philosophers, composers and poets. Science is catching up.
Regular readers of TNOC will be familiar with the biophilia hypothesis, which supposes an innate emotional link between humans and the natural world that positively impacts our psychological wellbeing. In other words, we feel most at home in naturalistic surroundings, as this is where we evolved and have spent the majority of human history. The concept has subsequently been applied to the design of workplaces (and other urban settings), where integrating elements of the natural environment is thought to result in improved employee health and happiness, thereby positively influencing business outcomes.

Biophilic design principles are believed to be behind Apple’s new Mothership headquarters in Cupertino, California. The Mothership is said to have the world’s largest piece of curved glass, an egalitarian design affording a panoramic view of the newly landscaped and biodiverse 71ha campus (including 9,000 trees) to all of its 12,000-member workforce, rather than just the bosses. In keeping with the biophilia hypothesis, Apple contends that such exposure to greenery and nature improves employee wellbeing, and, in turn, productivity and creativity.

But not everyone is convinced. In a recent edition of the BBC’s World Service Business Daily programme, esteemed Financial Times correspondent, Lucy Kellaway, confidently asserted to the international audience that such attempts to justify Apple’s substantial expenditure on the landscape were “hokum” and that “many of the world’s finest inventions seem to have been built in garden sheds”. Shareholders, she contends, should be concerned by such notions.

While Lucy Kellaway did not proffer an empirically-based critique of the concept, in my experience her scepticism is shared by many in masterplanning, who glaze over at the mention of seemingly woolly biophilic concepts, particularly where such ideas challenge the legibility of their wide, paved, plaza dominated designs (N.B. legibility refers to the ease with which people understand and negotiate the layout of a place; the concept is sometimes lazily and wrongly given as an excuse for excluding  biophilic elements, which in fact should, with creativity, form an important part of a coherent set of sensory design cues).

To be fair, others have put forward more reasoned arguments against the concept of biophilia. Yannick Joye and Andreas De Block’s thoughtful review of the hypothesis, critiques (among other things) the ‘sloppiness’ of the terminology; the evolutionary psychological basis for the savanna hypothesis (biophilia proponents assert that humans have a hardwired preference for savanna-like environments); and the supposed adaptive function of people’s biophilic tendencies more generally. With respect to defining biophilia, the seemingly disproportionate emphasis on our positive emotional connection with nature contrasted with our opposing biophobic responses is highlighted.  Regarding the latter two concerns, it is certainly true that not all biological characteristics are evolutionary adaptations.

Regardless of such objections, an increasing body of scientific research is identifying the neurological mechanisms behind the hedonic effects that exposure to natural stimuli seems to engender, and also the reverse that comes from an increasing disconnect from such influences, i.e. nature-deficit disorder, to use an expression first coined by Richard Louv. The relationships being discovered are no longer simply statistical correlations between self-reported mood scores or worker productivity and the environmental characteristics of workplaces (recall, statistical correlation does not prove cause and effect). Rather, multiple physiological parameters are also increasingly being measured in people in biophilic and non-biophilic settings, providing a much stronger scientific basis for the concept.

Interestingly, much research appears to be coming out of South Korea, a nation that has achieved spectacularly rapid economic growth over recent decades but whose workers toil longer hours than any other Organisation for Economic Co-operation and Development nation, and are consequently said to be experiencing peak stress. One study led by Bum Jin Park found that subjects exposed to natural settings had lower cortisol levels (the stress hormone), blood pressure and heart rate compared with those exposed to urban settings. Another study led by Gwang-Won Kim showed that subjects exposed to natural settings experienced increased activation of the insular cortex and the anterior cingulate cortex in the brain that are linked with happiness, insight and free-thinking, whereas urban settings activated the amygdala, which registers fear and anxiety. Similarly Gregory Bratman’s team at Stanford have recently found that exposure to nature reduces neural activity in the subgenual prefrontal cortex, a part of the brain associated with rumination, a self-defeating thought pattern linked with mental illnesses.

As for the assertion that the greatest minds only need garden sheds for inspiration, the power of the natural world to energise creativity has of course long been understood by artists, philosophers, composers and poets. Great scientists such as Darwin and Einstein are also said to have sought inspiration while walking in nature. Darwin regularly walked in his garden at Down House and in the surrounding Kent countryside, not so much for physical exercise but rather as an exercise in problem solving or “hard thinking”, to quote his son Francis. Ruth Atchley and colleagues have been attempting to quantify these cognitive advantages and have found that immersion in nature, and a corresponding disconnect from multi-media and technology, boosted scores on creativity and problem-solving tasks by an amazing 50 percent. They suggest that natural stimuli activate brain areas associated with restful introspection and mind wandering, which in turn sparks creativity, whereas exposure to attention-demanding technology necessitates regularly responding to sudden events and shifting between tasks, inhibiting the positive effects of divergent thinking.

Even tech moguls in Silicon Valley have been looking towards the great outdoors for revelation. The biophilic Mothership is said to have been the brainchild of Steve Jobs. According to his biographers, Brent Schlender and Rick Tetzeli, Jobs “needed to be refreshed by the primal rhythms of the natural world—the land, the hills, the oaks, the orchards. California’s spirit of newness invigorated him …. such natural grandeur was the perfect setting for big thinking”. Jobs was also well known for conducting meetings while walking outdoors, as is Mark Zuckerberg who is said to present his pitch to top-talent he is seeking to hire while walking in the woods and hills around Palo Alto. Nature is good for us, but walking in nature is even better. The added cognitive advantage of walking, while doubtless intuitive to many readers, is also increasingly supported by hard science. Marily Oppezzo and Daniel Schwartz (again at Stanford) found that the creative output of their subjects rose by staggering 60 percent while walking.

The restorative and healing capacity of nature isn’t of course new to the medical profession, which has a number of projects underway developing green prescriptions, aiming to provide us with our Vitamin N, nature fix and nature diet, to quote Richard Louv, Florence Williams and Tim Beatley respectively.

We seem, therefore, to be progressively moving towards identifying positive causative correlations between biophilic designed working environments (and other urban settings) and psychological health and cognitive function in employees, which are of course important ingredients for successful businesses. Clearly though, much more research is required to tease out the particular elements of landscape and built form design that appear to be having the most beneficial biophilic effect in our brains so that this information can better inform urban planning policy and landscape/architectural design. As an ecologist I have in this respect been particularly encouraged by the research of Richard Fuller and colleagues, which suggests we respond more positively the greater the ecological richness incorporated into greenspaces.

Many readers will be thinking that the positive link between biophilic design principles and our emotional state, inventiveness and productivity is self-evident. Haven’t we known all of this since the time of Alexander Pope, William Wordsworth and Henry Thoreau, and indeed probably long before?  While the connection does indeed seem intuitive, we must also continue to collate the hard scientific rationale required to quell the cries of “hokum” that will continue to come our way.

Oppezzo M & Schwartz DL (2014). Give Your Ideas Some Legs: The Positive Effect of Walking on Creative Thinking. Journal of Experimental Psychology: Learning, Memory, and Cognition, 40, 1142–1152. 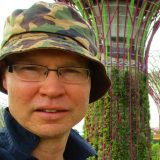 About the Writer:
Lincoln Garland

Lincoln is Associate Director at Biodiversity by Design, an environmental consultancy in the UK. Lincoln has been working as an ecologist and eco-urbanist in consultancy, academia and for wildlife NGOs for more than 25 years. He has a particular interest in developing sustainable ecologically informed landscape-scale approaches to development and land management, with a particular emphasis on the urban realm and ecotourism. Contact Lincoln by email: [email protected]

One thought on “Biophilic Benefits or Bio-baloney? (Probably) the Former”


Most of the narratives on the crises of development are woven around rapid population growth in developing countries. Yes. The number of world citizens is over seven billion. The challenges that this number raises far exceeds national and intergovernmental agencies’...

Parks have been significant sources of open space in urban history, ranging from private, even sacred spaces to fully public spaces serving as central points of social interaction and recreation (Stanley et al. 2012). On any given day, many thousands of people spend several hours outdoors in their local park simply living their lives. In addition to the explicit ‘reasons’...

18 October 2017 The Untamed City and its Indivisible Connection with Nature Shuaib Lwasa,  Kampala

The impacts associated with city functions, economic, environmental, mobility, extend well beyond their administrative boundaries. But the contemporary and dominant frameworks and systems for managing cities have always determined what activity is allowable, where, and how the infrastructure and any...

Awake a few hours earlier than necessary, we are on bicycles heading through urban infill, in a part of town that used to be Osaka Bay. Moving inland, we pass through a few old shopping arcades, and several dozen close-knit...