The team working for the Post-2020 Biodiversity Framework – EU Support project implemented by Expertise France participated to the international summit The Nature of Cities (TNOC) from the 4th to the 7th of June at the University of Paris Sorbonne of which the objective is to mobilize cities, metropolitan areas and subnational governments.

See the Post-2020 Biodiversity Framework – EU Support Project’s video of the event below.

TNOC Summit represented a unique opportunity for the project team to engage stakeholders on the establishment of a common roadmap for cities, metropolitan areas and subnational governments, in close collaboration with the Secretariat of the Convention on Biological Diversity (CBD) and ICLEI (Local Governments for Sustainability), with the perspective to support an ambitious international agreement for biodiversity at the COP 15 of the CBD which will be held in Kunming, China, in October 2020.

For more information about the project: http://www.4post2020bd.net. 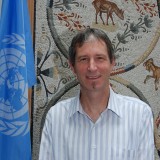 About the Writer:
Oliver Hillel

Oliver Hillel has been a Programme Officer at the Secretariat of the Convention on Biological Diversity (SCBD, administered by the United Nations Environment Programme) in Montreal, Canada, for the last 6 years. He is responsible for the issues of South-South cooperation, sub-national implementation (involvement of States, Regions and cities), Sustainable Tourism, and Island Biodiversity.

About the Writer:
Elisabeth Chouraki

About the Writer:
Didier Babin

10 February 2013 Water and the City: A Dispatch From an American Frontier Town Madhusudan Katti,  Raleigh


Out in the no longer so Wild West of America, a war is brewing. At the fringes of the great southwestern deserts, in the shadows of the high Sierra Nevada mountains, lies the great Central Valley of California, a primary battleground...

15 November 2017 Some Kind of Nature… But What Will We End Up With? Yolanda van Heezik,  Dunedin

Whenever I listen to the song Some Kind of Nature by the Gorillaz & Lou Reed, it makes me think about what kind of nature we are going to end up with in our cities, even though the song isn’t actually about urban nature at all. From my perspective here in New Zealand, it seems as if there are some...

11 May 2020 The 6th Mass Extinction and Cities: A View from Vancouver Christine Thuring,  Vancouver

Behind the scenes of pandemic, and long before, we have been quietly witnessing the planetary-scale annihilation of life-supporting systems, the Earth’s “6th mass extinction”. Unlike the previous five, this is the first time a mass extinction is caused by a...

3 May 2017 Thinking about a Landscape Approach to Revitalize the American Landscape William Dunbar,  Tokyo

I normally write in The Nature of Cities about biocultural diversity, particularly related to the developing world, but in light of recent events, I would like to ask the reader’s indulgence in my writing about a slightly different topic, and...