1 We are part of nature 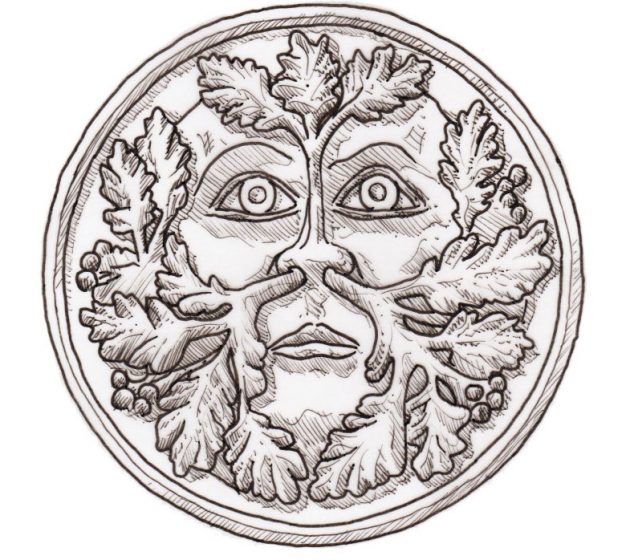 We are part of nature and we are interdependent with nature.

2 We think we can be separate from nature 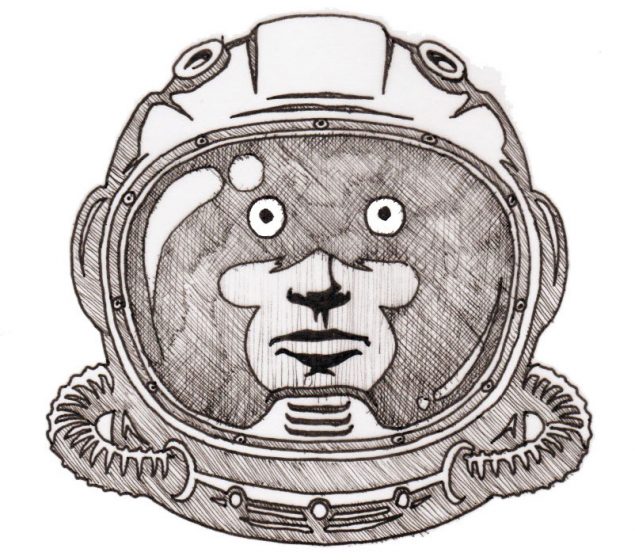 We cannot escape this interdependency. Even when we try, we are tied to living systems by umbilical cords of technology, constrained by natural limits.

3 Human culture is a force of nature 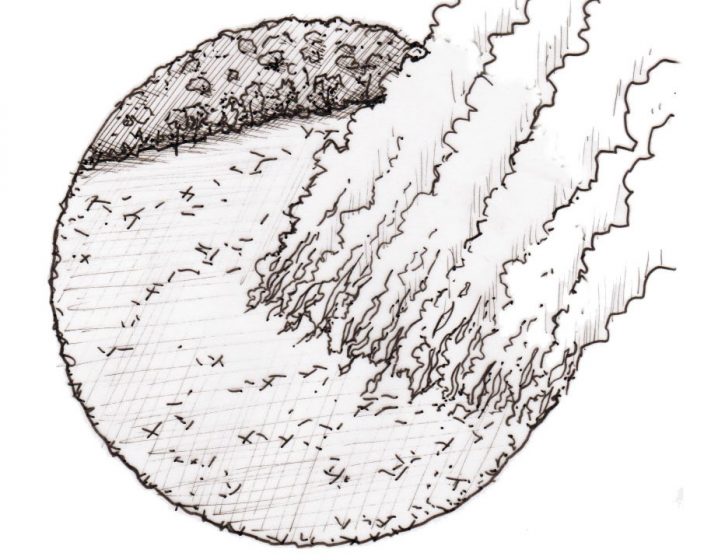 Our culture is manifest in our actions. Everything we do affects the natural world in some way. We are a force of nature.

In his slim but vital tome published in 2004, Stephen Boyden wrote from a “biohistorical” standpoint about human culture as a force of nature in The Biology of Civilisation and his main conclusion was that “biounderstanding is key to sustaining civilisation and ecological health and the dominant culture must ‘embrace, at its heart, a basic understanding of, and reverence for, nature and the processes of life.”

There are few reasons to be optimistic about the prospects for biounderstanding becoming central to culture, but the need for it is inarguable. 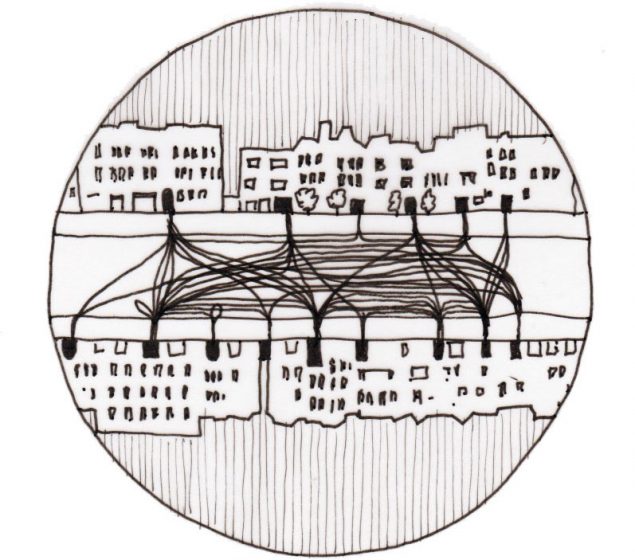 Everything we do is part of the patterns that make up our lives. Patterns of action reflect culture. The graphic is based on the seminal studies by Appleyard which captured the patterns of community and communication in a street and how it was affected by vehicle traffic. 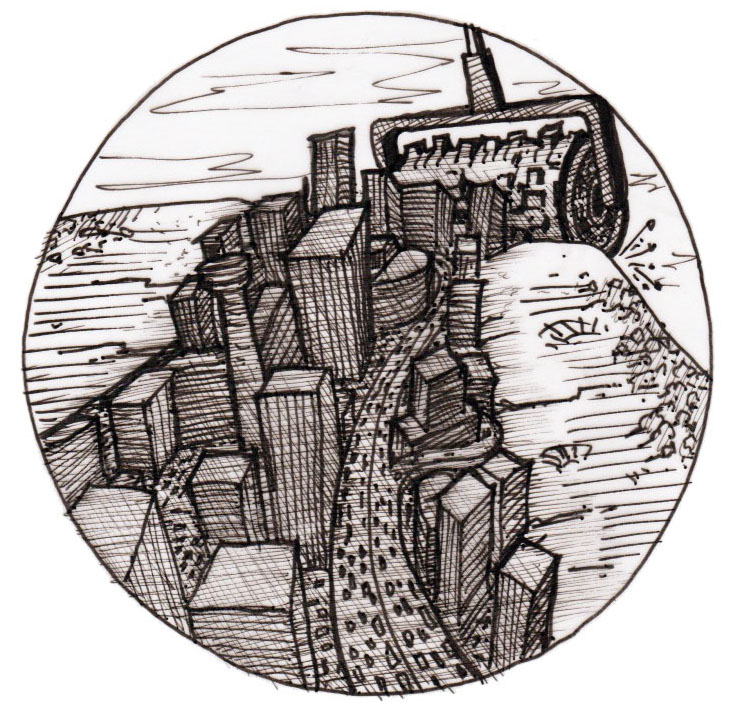 The dominant culture is determined by power relationships. Patterns of living are part of the patterns of occupying and using space. They are part of how we form our human habitats within the bubble of the biosphere.

How we build affects the natural world. 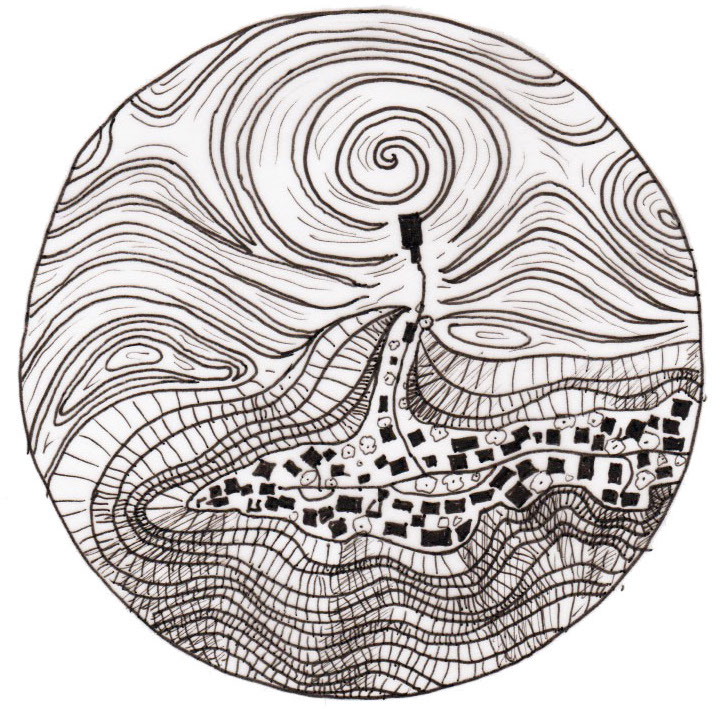 Like vortices in the stream of biohistory, our constructed habitats are human patterns that remain. In “Steps to an ecology of mind” (1979), Gregory Bateson identified patterns as key to understanding the relationship between humans, culture, and nature and wrote of the “pattern that connects”.

One result of those patterns is human habitation in its relationship to the biosphere as mapped by villages, towns, and cities. 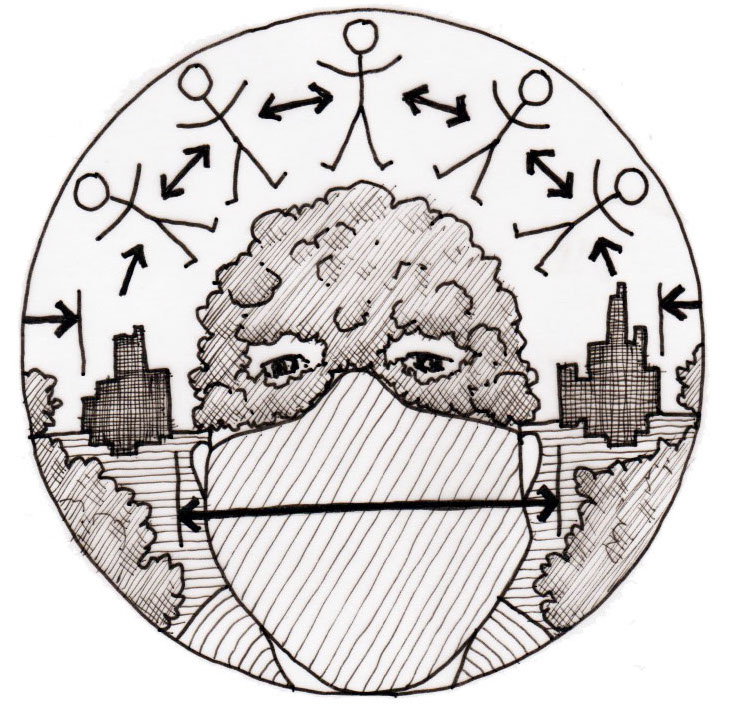 To enable nature to recover from the severe impacts of human exploitation on the patterns of nature, from habitat loss to plastic pollution, climate change, and everything in between, we have no choice but to change how we build. Which means changing our patterns of behaviour.

8 The big picture is ugly 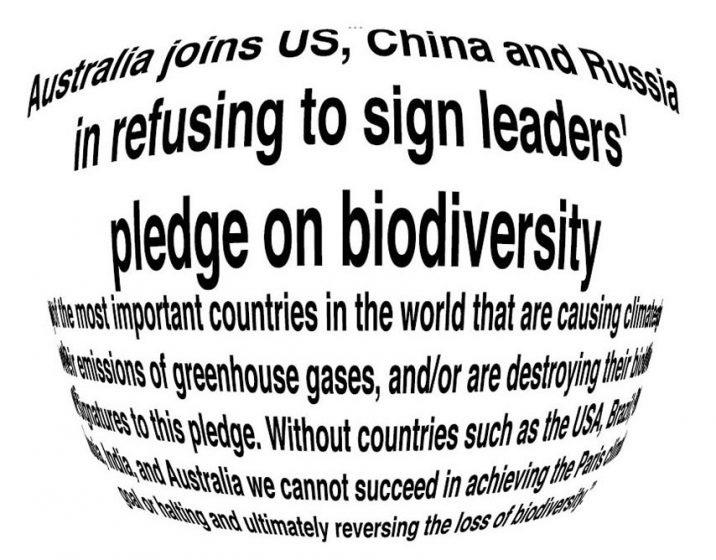 The big picture isn’t looking good. But the patterns for real change come from below, from daily life changes at a local level. 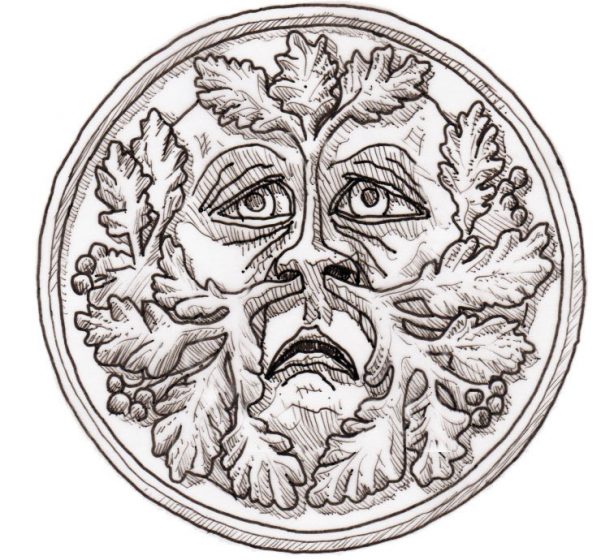 We can’t afford to despair. Lives depend on it. All lives. 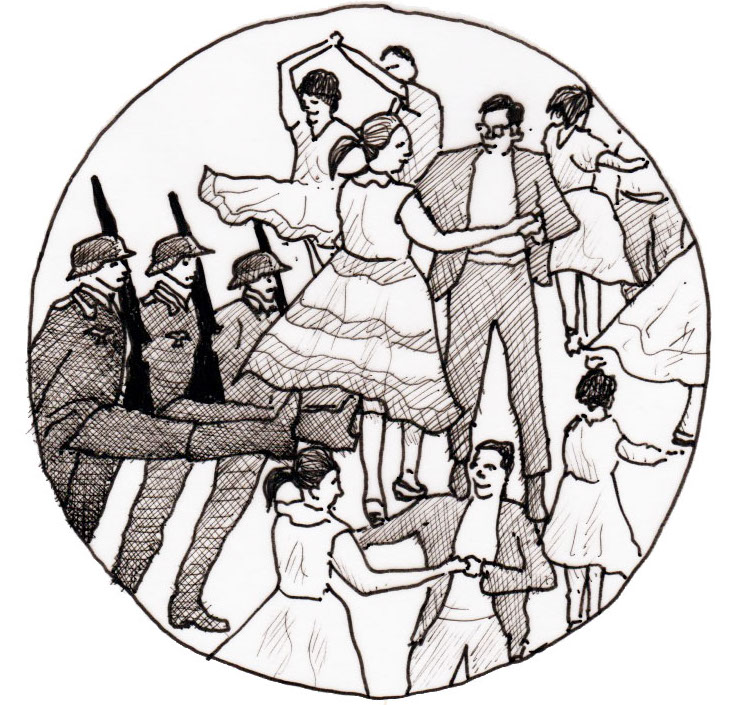 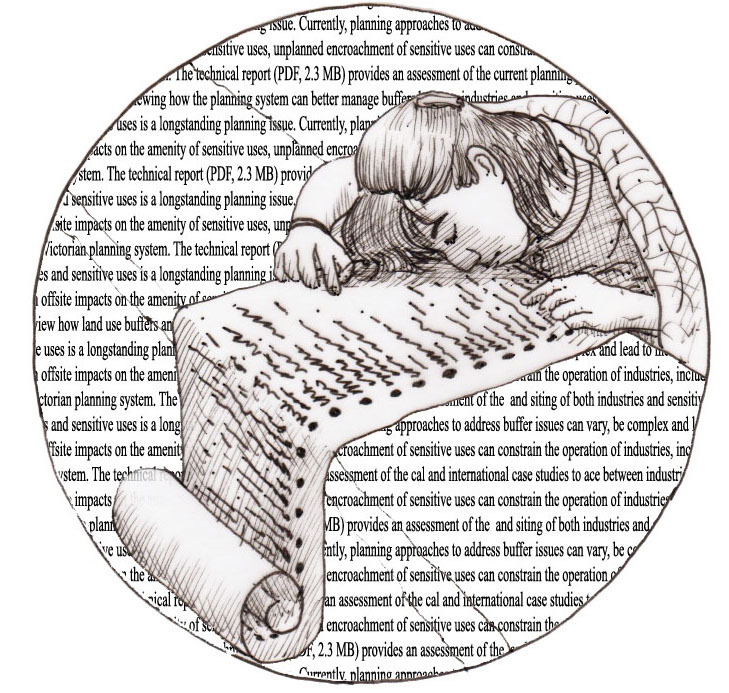 In my first TNOC blog, building on my doctoral thesis from 20 years ago, I argued that the creation of ecological cities requires the development of Design Guidelines for Non-Human Species. I suggested that an urban fractal or neighbourhood should be able to provide sufficient viable habitat that could support at least one key indicator species of fauna and a majority of the species of birds indigenous to the place. Later, I tried to take that idea further; it was supposed to be about changing the culture, deeply, it was supposed to be about something that is exciting, challenging, and worthwhile.

But it still turned into a somewhat uninspiring list. 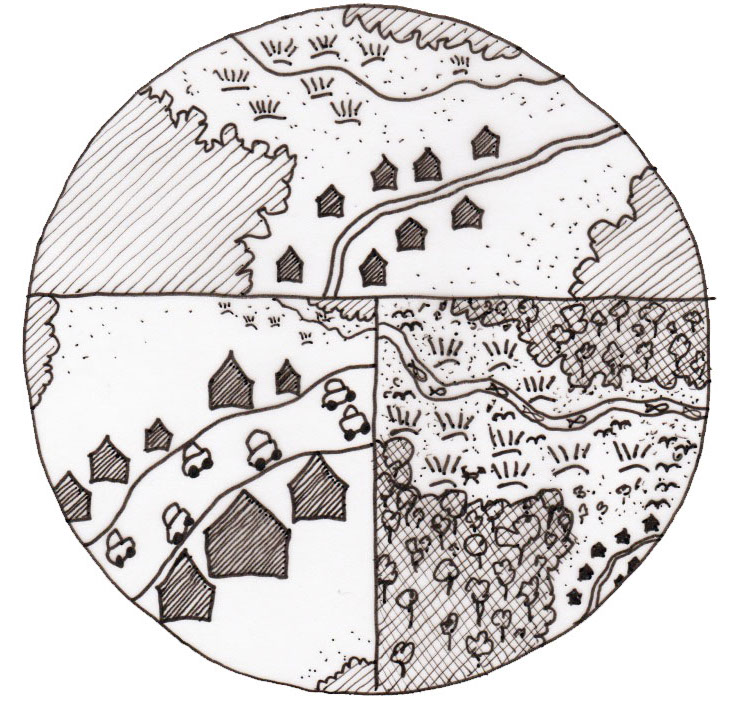 The design guidelines spoke to responsible planners and change-makers but, whatever its merits, I am compelled to observe that they really aren’t the sort of thing that stirs the blood and, more importantly, they don’t paint the bigger picture – to see how the patterns connect you have to actively make the connections. You have to see and experience the patterns.

Fractals are about pattern, not lists, but to see that bigger picture more clearly we have to speak with science, poetry, and art.

It’s about culture, after all.

The above graphic shows three points of view. The top one is the nominally objective “normal” as described by human mapping, the left one is “mainstream” culture with a consciousness of the car and house dominating all other reality. The right part of the image suggests how it might be seen from nature’s point of view.

There is some movement towards looking at the city from a non-human point of view see, for instance, Urban Animals: Crowding in Zoocities, reviewed by Chris Hensley in TNOC in 2015  in which Hensley notes that “using a nonhuman-centered framework, it sheds light on issues from a very different angle than that from which we are used to approaching such subjects” and that “the animal-focused framework presented here will be crucial in understanding urban life of the present and future.”

But patterns must be key.

13 A Pattern Language for Urban Nature 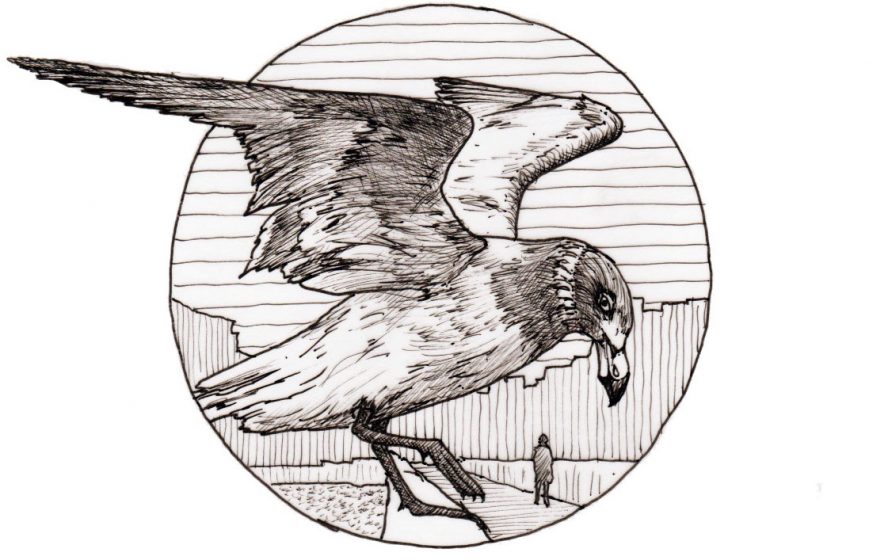 Taking my cue from Alexander et al and Mehafy, Salingaros et al, I am becoming convinced that there may be a way to bring these ideas to life in a way that has the potential to connect with the daily life of humans and other species. The proposition is simple: What happens if we take a pattern language approach that puts nature first?

I don’t have the resources to take this line of thinking a lot further, much as I would like to, so this graphic essay is little more than an indicator of what may be possible as something that might be developed in a similar fashion to and complementary to “A new pattern language” as an evolving toolbox open to iteration and further development.

All frameworks and insights, e.g., those described in “Urban Animals”, have the potential to be included and sustained within a Pattern Language for Urban Nature – which needs to have an understanding of the need for cultural change based on biounderstanding at its very core. 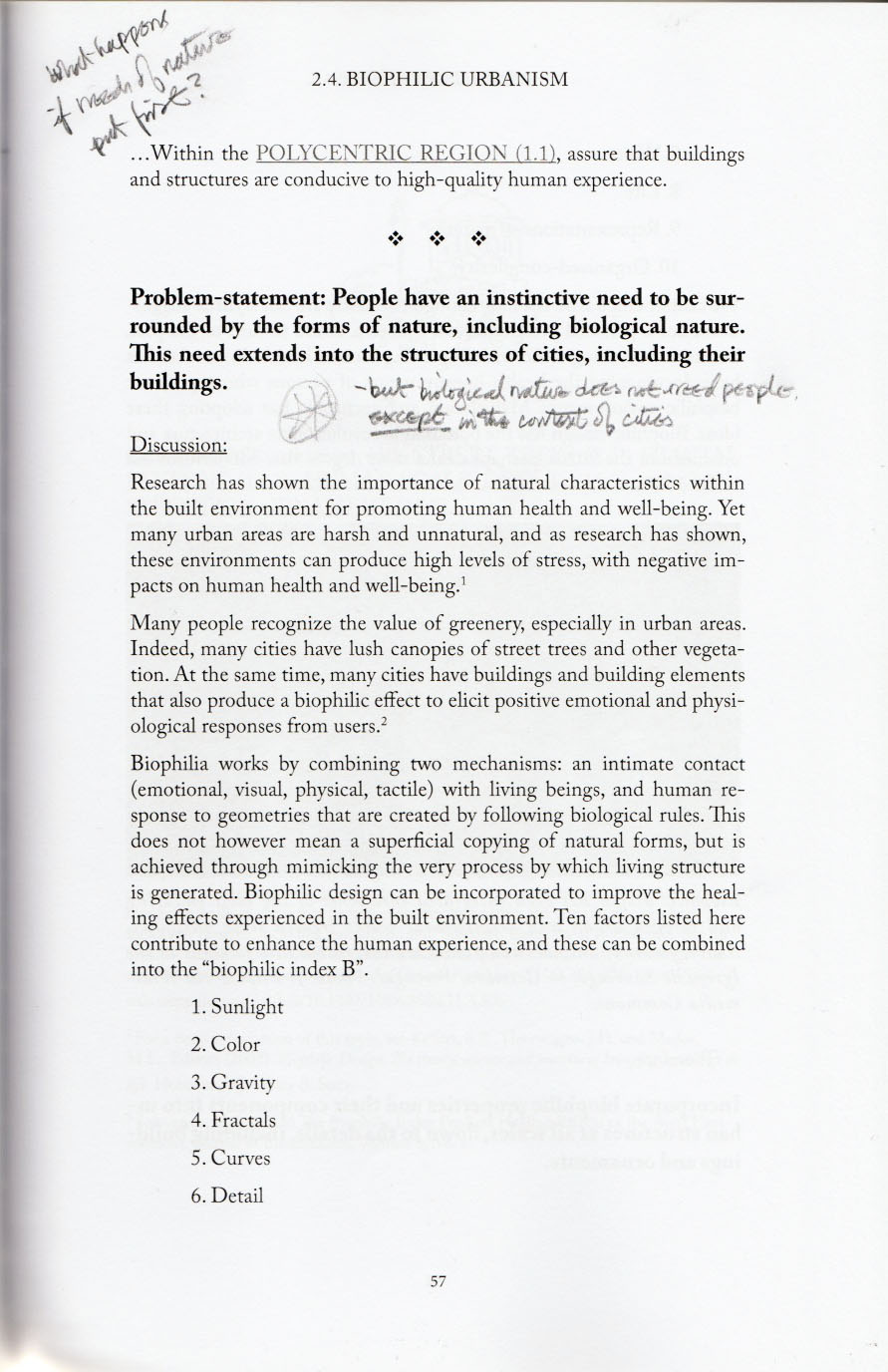 An example of a page from “A new pattern language” 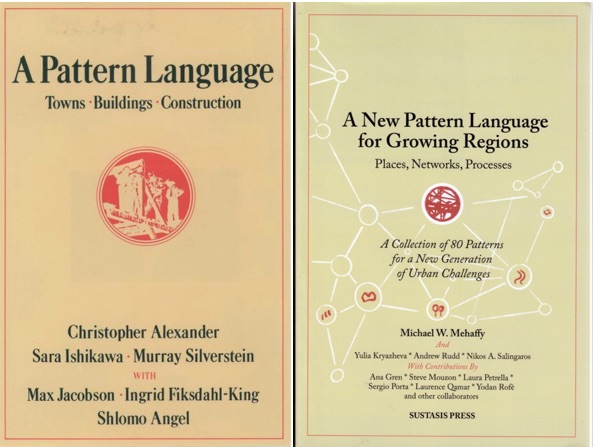 All drawings are by Paul Downton 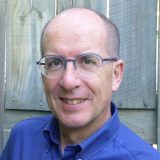 About the Writer:
Paul Downton

Founding convener of Urban Ecology Australia and a recognised ‘ecocity pioneer’, Paul and co-founders are pioneering the Ecocity Design Institute. Paul is also working on an artistic/publishing project coming soon to a crowd-funding site near you!

7 thoughts on “A Pattern Language for Urban Nature”


Victoria, in south-eastern Australia, has long had a reputation as a garden state, even to the extent of describing it as such on car registration plates in the past. Victorian cities boast many parks, large and small, which are highly...

Often described as Europe’s greenest city, Sheffield is reputed to have more trees per capita than any other, with over 100,000 trees spread across parks and open spaces, 10.4 percent woodland by area, and approximately 36,000 street trees. However, a public-private partnership (P3) is dramatically altering Sheffield’s urban forest. The various particulars of the situation have brought the northern English city into the national headlines,...

In 1990 the municipal landfill of the City of Elizabeth, New Jersey (near New York City) was officially closed and a leachate system, layers of cleaner soils, and two brand new wetlands were constructed. The landfill, located on the waterfront...

“Science cannot solve the ultimate mystery of nature. And that is because, in the last analysis, we ourselves are part of nature and therefore part of the mystery that we are trying to solve.” — Max Planck As a graduate student,...