Humankind took the carbon lodged in the darkness of the earth and expelled it into the sky, setting it alight in a great suffocation. Let there be profit.

In the end, Humankind reverse-engineered the heavens and the world.

And while there had been some semblance of order before, Humankind turned it all inside out, night became muddled with day, and day with night. Humankind took the carbon lodged in the darkness of the earth and expelled it into the sky, setting it alight in a great suffocation.

They said, “Let there be profit,” and by God there was! And though it boded no good, though they were well aware of the consequences, Humankind let it veil undivided over the earth.

And they called it Development, as they poured themselves whiskeys, admiring the sunset from their corner offices. Night fell, morning rose, a promising first business day.

And Humankind looked to the heavens and reflected upon how they might be exploited to the best advantage. They sent aircraft to carry them over the waters, spaceships to multiply their omniscience, a cacophony of communications to echo round the skies. And while all this was deemed definitely worth the damage that it might cause, admittedly much of it did not serve any useful purpose.

Humankind said, “Let us devise a way to raise capital to fructify future projects!” They called it the Stock Exchange, and so it came about.

In the evening they flew to see a theatrical performance on the other side of the ocean. Night fell, morning rose, a satisfying second business day.

And Humankind extended their control over every last portion of the earth. The land was divided up into nations disjointed one from the other by frontiers; where necessary, walls and fortifications were built, for certain parts of Humankind were deemed better kept out. And nations were divided up into private properties locked behind fences so that everyone else might be kept out.

They called it the Rule of Law and said, “Let trespassers be prosecuted!” They saw how good it was, that every man who paid off his mortgage got to play king of his castle.

Then Humankind set aside areas to be amalgamated into plantations, they uprooted indigenous flora and replaced them with monocultures. They spread out fertilizer so as to be quicker to market, and sprayed pesticides to eradicate all unwelcome growth. And though the pollinating bees were poisoned, though most species were amputated of their numbers, judging whether it was good or bad was to be deemed beside the point.

And they said, “Let farmers be prohibited from conserving seed for future generations because they are covered by patent,” and so it came about.

Though some ate at banquets, others had to get by on junk food. Night fell, morning rose, a profitable third business day.

And then Humankind set about subjugating time, with the intent to sidestep the tripartite tango that binds earth to sun, moon to earth. And though they could never seriously counter the seesaw of night and day, nor the merry-go-round of the seasons, they could bundle them up in a straitjacket of timetables and calendars, programmes and agendas.

And they ordained that all people, all things, march in step, and those who could not obey, or did not care to, were shunted aside.

And to supplant natural light so unreliably cyclical, to impede the nightly darkness interrupting the conduct of affairs, they girdled the Earth with a power grid so that neither space nor time might elude illumination at the flick of a switch. And when the world became synchronised and global, when productivity was liberated from its temporal shackles, they saw that it was far better than just good!

And they said, “Let time be money,” and had everyone punching the clock. And so it came about that not an iota of work went to waste.

In the evening, they checked their smartphone health apps, and dreamed of hoodwinking time by outsmarting death. Night fell, morning rose, a productive fourth business day.

And whereas the seas had teemed with fish, and the depths had been filled with an abundance of life, Humankind sent out a fleet of ships and netted the oceans’ creatures, with no bother for their depletion or extinction. And even though they poisoned the waters with industrial waste and throttled all that lived with plastic, annual dividends had little difficulty convincing the shareholders that it was good.

Then Humankind selected poultry too aerially challenged to envisage escape into the sky, and penned them up in great promiscuity in vast enclosures, exiled from the sun and the rain, on ground purged of all growing things. And they were unnaturally selected to grow at a record rate, greased up with industrial feed and medicines, so as to minimise the time between incubation and being shipped off, shrink-wrapped.

And Humankind said, “Let their purpose be served by serving our consumption,” and so it came about.

Then they pulled out their credit cards and blessed the cornucopia overflowing from the supermarket shelves unto their trollies. Night fell, morning rose, a sated fifth business day.

And the fate of those land-bound, readily domesticated creatures was regulated according to the products they could provide: flesh for nourishment, skins, and wool for clothing, bones for tools, weapons, musical instruments, fertiliser, or glue. Whether it was good or not was moot, because it was certainly useful. Those creatures more fearsome, with poisonous fangs, daggered claws or powerful jaws had a fighting chance, until Humankind said, “Let us develop technologies that give us the upper hand.”

And then Humankind said, “Let us create God in our own image,” with the result that He was self-centered and vengeful, though nonetheless enterprising and wily. After which Humankind willfully surrendered their prerogatives into His authority, consenting that He dictate what they might or might not eat, whom they might or might not fuck, and whom they would be allowed to kill in His name.

Then Humankind multiplied and occupied, and organised the dominion that served to divide the privileged from the subaltern. Those with capital over those forced to provide labour. Those with male genitalia over those otherwise equipped. Those white-skinned over those with other complexions. Those colonising over those indigenous. Those technically savvy over those less well-armed to fight back.

And Humankind tightened the grip subduing the Earth in its entirety, over the lands and fields, the forests, the valleys, and mountains, over the rivers, the wetlands and the sea. They extracted ores from the ground, minerals, and metals, and transformed them beyond recognition, into cities and transport networks, weapons of mass destruction, and amusement parks. The Earth in its entirety lay at their disposition, and by God, could it be any other than good?

Humankind raised a glass and said, “Surely God blesses us for our industry and the comforts we have wrought.”

And turning a blind eye to the paradise in tatters that lay all around, they added, “Thank God it’s Friday!” Night fell, morning rose, a conclusive sixth business day.

On the seventh day, Humankind declared the job done, and jolly well done, at that.

And they blessed that day and sanctified it, to be devoted to leisure activities, or simply sitting back and letting themselves be entertained. And those were the most profitable businesses of all, and yes, it was very, very good indeed. 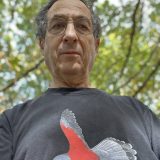 About the Writer:
Joseph Rabie

Joseph Rabie is an all-purpose creative person with a finger in many pies – architecture, urban studies, photography, multimedia, digital art, writing, cartography, drawing, caricature, cooking (sometimes). The question of place constitutes the motive force uniting these various pursuits, giving meaning to the fundamental relationship that connects humans and all other creatures to the singular where on Earth each inhabits.

27 July 2015 Get Your Blue Mind On Tim Beatley,  Charlottesville


A review of the “Urban Blue,” the Blue Mind Five Summit, which took place on May 11, 2015 in Washington, D.C. “Get your blue mind on!” is a frequent expression and admonition of Wallace J. Nichols, known simply as “J”...

The Nature of Cities website has advanced the understanding of cities as both harbors for biodiversity and as places where there are many opportunities for natural habitats and ecoservices. Steadily, ecological scientists and practitioners are restoring habitats within the world’s cities. Ecological restoration is not just for the “wild” lands where people go for their holidays; it is for where we live...

18 February 2016 Resilience and the Butterfly Effect: Could a Grain of Quinoa from Bolivia Influence Barcelona City Resilience? Lorenzo Chelleri,  Barcelona

Edward Lorenz’s application of chaos theory to weather forecasting is better known to the general public as “the butterfly effect”, thanks to his conference presentation, “Does the flap of a butterfly’s wings in Brazil set off a tornado in Texas?”...