I am the mayor of a legacy city, a city that rose and fell on the fluctuations of an industrial marketplace.  Like Detroit, Cleveland, and dozens of other cities that have experienced continuous population and job loss since their peak, my hometown of Gary, Indiana, once provided the backbone of the nation’s economy. These cities led the way in educational innovation, architectural design and cultural development.  In the 1920s, Gary earned the nickname of Magic City because of its exponential growth.  Seventy years later, one half of the city’s population is gone, leaving an overwhelming inventory of vacant and abandoned buildings, a nearly 40 percent  unemployment rate and a 35 percent poverty rate in the rear view mirror.
The creation of a “just city” is neither easy work nor for the faint of heart. It requires that public service remain the focus of political leadership.
Despite the devastating statistics, Gary is home to people who continue to remain faithful after others left. These individuals are raising children, purchasing and maintaining homes, pursuing business opportunities and continuing to invest their time, talent and treasure in a city that some said was not worth the energy. These individuals are my neighbors, fellow church members, former teachers and classmates.  My “Just City” is dedicated to these legacy residents. Together, we must retool Gary into a city that better serves all of us. This is undoubtedly a complex proposition that requires vision, planning, faith. resilience and cheerleading.

There are times when older residents long for the “good ole days,” but a vision for the future is also essential. History must be incorporated into a plan forward, and for that reason preservation is an integral part of planning in Gary. The award-winning restoration of Marquette Park Pavilion on Lake Michigan and the planned restoration of the City United Methodist Church are two examples of how historic preservation can work in a city’s future. Building on existing assets such as the lakefront, transportation and the proximity to Chicago also fuel a new vision. But the use of non-traditional economic drivers such as art have the potential to be transformative. Recently, city staff, students from the University of Chicago’s Harris School and Theaster Gates’ Place Lab team developed the concept of ArtHouse, a restaurant incubator built around arts and culture. This addresses the void of restaurants in the city by training entrepreneurs, promoting a burgeoning art scene and encouraging the use of an underutilized facility. Collaborations like this must continue.

A “Just City” requires intentional planning which contemplates the participation of all residents in city growth.  Political cycles and a society that feeds on instant gratification sometimes turn mayors into emergency responders.  Sustainability dictates a deliberate approach to rebuilding. Through planning we ensure sustainability and inclusion while protecting against the changes of political winds. One of the biggest complaints against our administration is that we spend too much money on planning.  While we acknowledge that many plans sat on shelves in the past, the adage that those who fail to plan must plan to fail is even truer with cities—especially legacy cities. Gary has been fortunate to have assistance with planning through the White House Strong Cities, Strong Communities designation and the federal Sustainable Communities program; an ongoing collaboration with the University of Chicago and strong relationships with regional and local organizations like the Northwest Indiana Regional Development Authority, the Northwest Indiana Regional Planning Commission, the Legacy Foundation, the Urban League, the Miller Beach Arts & Creative District and the Central District Organization. We have learned to place a premium on training and technical assistance, a clear shift in the traditional relationship between municipal government and potential funding partners.  Historically, Gary and other municipalities have looked to the federal government to simply write a check. While we still accept checks, we understand the benefits derived from planning.  This approach has paid dividends through the demolition of the Sheraton Hotel, a brownfield that cast a shadow over downtown Gary for over 20 years, as well as the successful completion of the once-stalled redevelopment at the Gary/Chicago International Airport. That project included a public-private partnership and unprecedented reinvestment by anchor community institutions like the Methodist Hospital, Indiana University Northwest and the Northern Indiana Public Service Company.

But planning won’t succeed without careful stewardship of our environment.  One of the greatest challenges facing legacy cities is the multitude of brownfields that create health hazards and eyesores in our communities. The contamination associated with these buildings or vacant spaces pose a quandary to me and to city planners. But as with many challenges, this presents an opportunity to create a greener Gary through employing innovative tools such as deconstruction, waste-to-energy technology and other advanced manufacturing and construction methodologies. A more just city requires that we embrace practices that preserve the environment for future generations and encourage manufacturers, even those that have enjoyed favored status because of their decision to maintain jobs in the city, to take a similar approach. Community loyalty cannot be viewed as a license to continue practices that are not good for the environment. Steel and other industry must retool to meet regulatory requirements and for the health and safety of residents. At the same time, they should be allowed to do so in a manner that achieves a delicate balance between preserving jobs and continued employment of workers while pursuing environmental health and green development.

A “just city” dictates the use of technology and innovation, a fact also driven by resource challenges. Whether it is the use of graduate students as consultants, the use of computer programs designed for Detroit and Cleveland, or garnering better methods of delivering public safety, solid waste disposal and communication with residents, innovation is allowing the city of Gary to close the gap created by declining financial resources.  This creates a more just city because it improves outcomes for all who consume government.

Finally, a “just city” empowers and honors residents. The experience of watching your city crumble before your eyes can be disheartening. One might even argue that there is a form of Post-Traumatic Stress Disorder associated with the decline of cities like Gary, Detroit, Flint, Michigan, and Cleveland. Citizens become hopeless, cynical, angry and even abusive of the public officials who have a sincere desire to help. This may even lie at the base of the violence that plagues many urban communities. Every effort to rebuild a legacy city must include a robust plan to include residents in the rebirth.  This approach is more likely to prevent disenfranchised members of the community from feeling that revitalization is occurring around them and without their input.  Communities benefit when all citizens enjoy the fruits of growth and revitalization and from the consideration of diverse ideas.

From our use of 311 technology, frequent public forums, “15 minutes with the Mayor” in city hall, and the use of social media, Gary citizens have been encouraged to raise their expectations of local government. While this can be a double-edged sword in a resource-challenged environment, it also provides a degree of ownership that causes residents to be active participants in the rebirth of the community.  At the same time, we must assist residents in their need to address the personal challenges associated with poverty and disinvestment in the city. Traditional workforce development tools must be enhanced and often replaced by an aggressive approach to human development that teaches marketable skills and provides remediation whenever and wherever needed. The creation of jobs and the development of skills in proportion to the need of Gary residents has been the Achilles’ heel of our administration. We will never achieve success as a community unless we institutionalize support for African-American men and boys. To continuously allow such a large section of our community to be marginalized defeats our collective purpose.

The creation of a “just city” is neither easy work nor for the faint of heart. Some even consider it thankless. It requires that public service remain the focus of political leadership. The most well-intentioned service is fraught with criticism, pitfalls and missteps. But on my most frustrating day, the delivery of good government to the legacy residents of Gary, Indiana reaps many more rewards than challenges, and consequentially it is my honor and privilege to serve my hometown. Ultimately my definition of a just city is one that provides good government to its citizens. 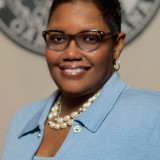 About the Writer:
Karen Freeman-Wilson

Karen Freeman-Wilson has been the mayor of her hometown of Gary, Indiana since January 2012. She is the first female to lead the "Steel City" and the first African-American female mayor in the state of Indiana.

One thought on “Home-Grown Justice In a Legacy City”


Ok, if you can look past my anthropomorphic statement that wildlife make decisions, the topic I would like to address deals with the adoption and use of ecological principles by the design community. Patch size, landscape connectivity, edge effects, corridor...

A review of The Future of the Suburban City: Lessons from Sustaining Phoenix, by Grady Gammage, Jr. 2016. ISBN 1610916239. Island Press, Washington, D.C. 208 pages. Buy the book. When taken together, recent books, lectures, and exhibitions on design paint a picture...

In the last days, with the air finally above the freezing point, and the grey silhouettes of the barren twigs dripping with fine silvery moisture against the faint morning light, I have been drawn into the forest. Every morning, I...